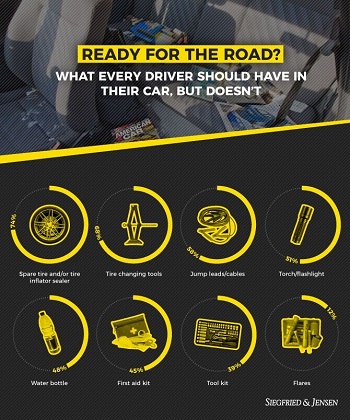 More than six in ten drivers (62%) believe that they’d be prepared if their car were to break down on the road, but new research from Siegfried & Jensen suggests that on average, drivers carry just four of the eight emergency items recommended by DMV.org “as a minimum”.

This is in spite of the fact that that almost half of all drivers in the U.S. (45%) have broken down at least once in the last five years — a figure that rises to 51% among millennial drivers aged 16-34.

Although three quarters of drivers (73%) keep a spare tire and/or tire inflator sealer in the car, just half (51%) have a flashlight, 45% have a first aid kit and just 12% have flares — important not only to mark your car’s location in the case of an accident, but also to start fires in an emergency.

Below is a breakdown of the proportion of drivers who keep each of the eight minimum recommended items in their car:

The most common items in drivers’ cars are as follows:

Siegfried & Jensen found that less than a quarter of Americans keep paper maps in the car — and only 11% have a sat nav, suggesting drivers are relying on cell phones for directions. But as signal can drop in remote areas and phone batteries can die after several hours, this system can prove to be both unreliable and unsafe.

Just 6% of drivers keep an empty gas can in their car, while 9% have a small shovel. Other uncommon but useful items most drivers are choosing not to carry are a fire extinguisher (5%), tow rope (6%) and high-vis bib (1%).

“This research goes to show how gravely underprepared drivers are for accidents on the road,” says Ned Siegfried, President of Siegfried & Jensen. “Some 62% of respondents believed they would be prepared in the event of a breakdown, but this misplaced confidence suggests there isn’t enough being done to educate drivers about how to get their vehicles ready.

“It’s important to anticipate potential accidents, particularly amidst the holiday season. Temperatures and weather conditions will be dropping across much of the country, a significant number of drivers will be embarking on long journeys,  and waits for breakdown services will likely be longer than usual.

“Although getting lost without access to a map or being stuck on the side of the road for a couple of hours can be a minor annoyance, it’s crucial to prepare for more serious accidents for the safety of all road users.”

Siegfried & Jensen surveyed 2,121 car owners who drive on 9th-10th October 2018. The list of eight essential items was sourced from DMV.org, which recommends a basic emergency kit for drivers. The remaining essential and non-essential items were gathered from a selection of reputable websites, such as the AAA, driving-tests.org, Car-care.org, DMV.org, and fact sheets from WSDOT.