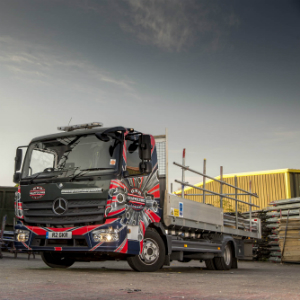 Award-winning GKR Scaffolding has sharpened its image and enhanced its environmental profile by commissioning eight, strikingly-liveried Mercedes-Benz trucks from Dealer Sparshatts of Kent.

First to arrive were a quartet of 4×2 tractor units: an Actros 1836 StreamSpace and three Arocs 1836s with ClassicSpace cabs and Fassi F155 cranes.

They were followed by three 18-tonne Arocs 1824s, one of which is also fitted with a Fassi crane, and a 7.5-tonne Atego 816. All of the rigids have ClassicSpace cabs and SB Components dropside bodies with the exception of one 18-tonner, which came with a pair of demountable scaffold bodies by Wheelbase Engineering.

Rochester-based GKR was launched in 1979 by Graham Rowswell, and offers a comprehensive scaffolding service. Winner this year of the prestigious Access & Scaffolding Specialist of the Year title at the Construction News Awards, and of its fourth City of London Considerate Contractor Scheme Gold Award, the firm is proud of its commitment to personal service and innovation.

“We’re delighted with these new vehicles, which look fantastic,” declared founder’s son and Director Neil Rowswell. “Image is important and Mercedes-Benz has a reputation for quality that can only enhance ours.”

GKR specified its new trucks to handle a huge range of projects, the overwhelming majority of which are undertaken within the area bounded by the M25. “We worked on 85 jobs last month alone,” explained Mr Rowswell. “Some took us into small mews terraces where space was very confined, while others were on massive sites. With these Mercedes-Benz vehicles we’re placed to deal with any requirement.”

All of GKR’s new trucks are the subject of contract hire agreements under which Sparshatts of Kent is maintaining the cranes as well as the chassis and bodies. The operator has retained two other vehicles, which it leases from a third-party provider.

“We’ve been running Mercedes-Benz vehicles for some time, so we know all about their reliability and low running costs,” confirmed Mr Rowswell. “But we felt the time was now right to invest in some cleaner, ‘greener’ versions. Their advanced Euro VI engines mean our new trucks already comply with the requirements of the Ultra Low Emission Zone which is due to come into force in London in 2020.” 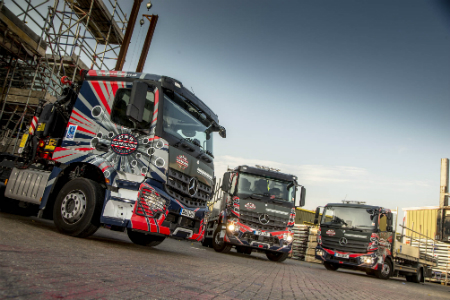 He continued: “We involved our drivers in the selection process and they were overwhelmingly in favour of the Mercedes-Benz product, which they preferred for its comfort and all-round driveability. Given our previous experience and the competitive deal put together by Sparshatts, we were very happy to provide them with the trucks they wanted.”

Mr Rowswell added: “The Dealer’s truck sales executive Martin Kemsley provided a really good service, liaising with the bodybuilders and crane manufacturer to make life as easy as possible for us.”