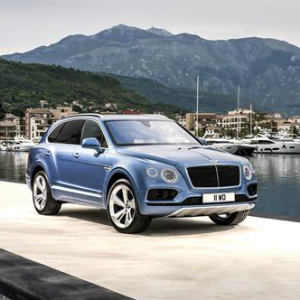 One year on from the very first production model leaving the assembly line at Bentley’s iconic UK headquarters in Crewe, England, the Bentayga has received international praise and recognition. So far 12 awards have been won, stretching from the company’s home market to the Middle East, China and the USA.

The Bentayga was designed to be the world’s fastest and most luxurious SUV and has been recognised for its high level of luxury, elegant, timeless design execution, off-road performance and cutting-edge advanced technology.

Commenting on the strength of demand for the Bentayga, Wolfgang Dürheimer, Chairman and CEO of Bentley Motors, says:

“This independent recognition reinforces that we are setting the benchmark for modern luxury with Bentayga, a true Bentley. Customer reaction has been outstanding. We have increased production and reduced long waiting times for customers by making more than 5,500 luxury SUVs in 2016. Deliveries have commenced in all 56 markets in which we are active and our dealers are well placed to meet customer demand. Overall I believe this to be a remarkable first year’s performance.”

The definitive ‘SUV of the year’

The Bentayga received plaudits across three continents in 2016, with the car’s design, performance and level of luxury applauded.

In the UK, Autocar magazine presented the Bentayga with the ‘Game Changer’ award, marking the SUV as unique in the automotive world. Robb Report UK named Bentayga ‘SUV of the year’, with judges concluding it is a ‘truly ground-breaking SUV’.

The world’s most luxurious SUV was well received in Bentley’s biggest market, the US. Robb Report US named Bentayga the ‘Best of the Best’ in their prestigious annual awards and men’s magazine Gear Patrol named Bentayga a 2016 GP100 Winner, describing the car as ‘the new SUV benchmark’.

This success continued in China, with Car and Driver awarding the car the Jury’s Special Award. The Global Times also praised Bentley’s first SUV, naming it the Annual Best Brand Product in March.