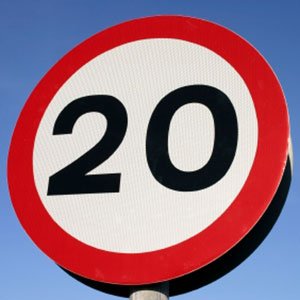 The number of serious accidents on 20mph roads has increased by over a quarter (26%) last year, according to analysis of government data by road safety charity, Institute of Advanced Motorists (IAM).

In the same period, slight accidents on 20mph roads increased by 17%.

The IAM also discovered a decrease in the number of serious and slight accidents on 30mph roads and 40mph roads.

Casualties in 20mph zones also saw a rise – serious casualties increased by 29% while slight casualties went up by 19%.

Simon Best, Chief Executive at IAM, said: “The government and councils need to take stock on the effectiveness of 20mph signs.

“Recent advice, guidance and relaxation of regulations has all been about making it easier for councils to put 20mph limits in place.

“More and more roads are being given a 20mph limit but they do not seem to be delivering fewer casualties.

“The IAM are concerned that this is because simply putting a sign on a road that still looks like a 30mph zone does not change driver behaviour.

“More evaluation and research is needed into the real world performance of 20mph limits to ensure limited funds are being well spent.

“In locations with a proven accident problem, authorities need to spend more on changing the character of our roads so that 20mph is obvious, self-enforcing and above all contributes to fewer injuries.

“In Europe, it is long term investment in high quality segregated or shared surfaces that have led to a much safer environment for cyclists and pedestrians.”

Note: An accident can consist of several casualties, for example if a bus crashes and kills everyone on board, it is one fatal accident but 30 fatal casualties.