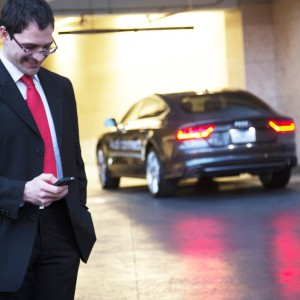 Car parking could become entirely fuss-free for fleets by the end of 2013, after Audi announced the trial of a new wireless payment project.

New technology being tested in Germany could mean that in the future, drivers park, pay and leave car parks without the need for tickets or physical cash exchange.

The ‘Audi Connect wireless payment’ scheme involves a communication link being established between cars and car parks, with charges to be paid automatically via direct debit.

This could mean that fleet drivers would never have to worry about having the spare change for payment, with the amount billed straight to the company account.

The system is due to be made publicly available by the end of the year.

Audi said the long-term aim is to establish wireless payment as another element of the Audi Connect option, which hosts internet-based services such as Google Earth and Google Street View.

The pilot scheme is taking place in Audi’s hometown of Ingolstadt, Germany, with up to 13,000 connected test cars being trialled.

Each car communicates with parking facilities via an individual Radio Frequency Identification (RFID) transmitter, the number of which is entered into an online portal by each driver.

Meanwhile, the wireless transponder providing the link with each car is mounted on the inside of the windscreen.

It operates nine car parks and underground parking garages in the city, with a total of 6,200 spaces and 21 entrances and exits.

The trial participants will receive a monthly bill from IFG detailing any parking charges incurred, with the amount debited from the user via direct debit.

All Audi AG employees who lease a new car in the coming months will be able to participate in the trial.

When their car is handed over, they will receive the ‘Audi Connect wireless payment starter kit’, including a wireless tag.

Another similar parking aid by Audi was recently debuted at the Consumer Electronics Show in Las Vegas – Audi piloted parking.

Also at the prototype stage, the system uses wireless connectivity between car and car park to enable the vehicle to find the nearest parking space.

The vehicle will then automatically guide itself to that space, parking autonomously.

All is achieved through a smartphone app, which allows the car park’s central computer to take over part of the control function.

The computer transmits the car park layout and space occupancy to the vehicle, allowing it to drive itself from the starting point to the destination.