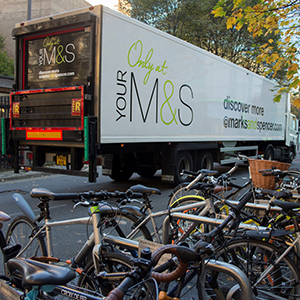 The trial of potentially life-saving 360° camera technology has been hailed a success by Brigade and Continental.

Although systems that offer a surround view in a single image have become more widespread on rigid trucks, the Brigade Backeye 360 Elite system has been put through its paces over the past three months for the first time on a fleet of much larger articulated HGVs.

Tony Whitehouse, Fleet Manager at Marks and Spencer said: “We’ve been trialling the system now on rigid and articulated vehicles in our fleet, and proven its utility in real-world situations that our drivers face daily. Drivers’ feedback is that they fully expect it to make a positive contribution to the safety of our vehicles, employees and other road users.”

The technology uses four ultrawide-angle camera lenses mounted on the vehicle to capture all blind spots, with simultaneous digital images from the camera being processed and ‘video-stitched’ resulting in a real-time ‘bird’s-eye’ view. This is delivered to the driver’s monitor in a single image.

In any large vehicle blind spots are a safety hazard which can contribute to high repair costs and downtime for the fleet, as well as adding to insurance costs. At present, sadly, blind spots can also lead to the injury or death of pedestrians, cyclists, motor cyclists and other road users and the Brigade Backeye®360 Elite system aims to help avoid such tragedies by making it easier and quicker for a driver of an articulated HGV to assess and react to potential hazards.

Andrew Gilligan, Cycling Commissioner for London said: “I am pleased to see a marked progress in the use of advanced driver assistance systems (ADAS) on large vehicles. Surround View systems offer a great aid to drivers in incident avoidance, making London’s roads a safer place to cycle, walk and motorcycle. Safer roads for everyone result in the driving down of the human and economic cost of serious incidents on the capital’s roads.”