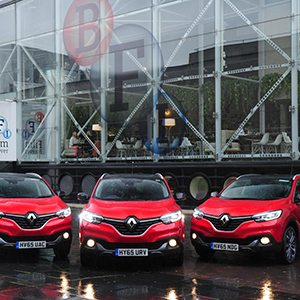 The All-New Renault Kadjar has a starring role at the 59th BFI London Film Festival in partnership with American Express®, with a fleet of 32 of the brand new stylish crossover vehicles chauffeuring an array of stars to and from various locations across the capital during the twelve day festival which opens today and runs till 18th October 2015.

The French carmaker has supported the BFI (British Film Institute) since 1995 and is extremely proud to be the Official Car Partner of the Festival for the 20th consecutive year.

Combining a stylish exterior with a quiet and comfortable interior, guests being chauffeured in the Kadjars will be able to arrive at their destination feeling relaxed and ready for the red carpet. Among the stars expected to attend this year’s festival are actor, Benedict Cumberbatch, and Director, Christopher Nolan.

Francesca Vinti, BFI Director of Development, said: “The BFI London Film Festival is delighted to be working with Renault as our Official Car Partner.

“With hundreds of festival films being shown in many different locations across London, it is so reassuring to know that Renault is enabling our festival guests to travel across the city in both comfort and style. We’re thrilled and privileged to welcome them back.”

The All-New Kadjar will be transporting guests to a wide variety of films, such as Jia Zhangke’s Mountains May Depart – the opening film of the festival. The city-wide festival will then close on 18th October with Being Evel – a dramatisation of the popular daredevil’s life.

Jeremy Townsend, Communications Director, Renault UK said, “In the twentieth year of our successful association with the London Film Festival we are proud to be partnering it once again. The fortnight is always an exciting one for all involved and we can’t wait for the guests to try out Renault’s All-New Kadjar from the back seats, ensuring their sophisticated arrival at the many famous cinema venues throughout the capital.”

The All-New Kadjar fleet will be kitted out in bespoke London Film Festival decals for the duration of the event which supports the British Film Industry through promoting creative and cultural roles.

Recently launched in the UK, the All-New Renault Kadjar further strengthens Renault’s presence in the popular crossover market and builds on the enormous success of its smaller sibling, Captur.

The All-New Kadjar is available with a choice of two diesel and one petrol, efficient yet powerful, engines, manual or EDC automatic transmissions, two- or four-wheel drive and four trim levels.

For more information about Renault and the All-New Renault Kadjar visit www.renault.co.uk