The Renault Master E-Tech has been chosen by Europe’s leading distributor of workplace products and services to spearhead the transition of its UK business to an all-electric delivery fleet. 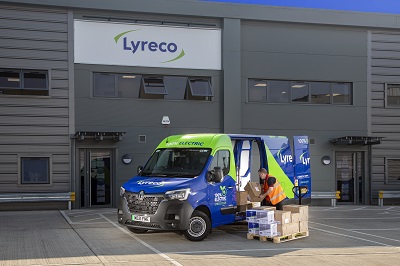 Lyreco, which has a presence in 25 countries in Europe and Asia, has introduced 17 all-electric Renault Master E-Tech panel vans to its London operation, which will work out of its Greenford, Tottenham and Dartford distribution depots. They are the first electrified light commercial vehicles that the multinational company has used in the UK.

The arrival of the zero tailpipe-emissions-in-use panel vans is the culmination of a two-year search by Lyreco to find a solution that matched its proposition for an electrified London delivery fleet. Any solution had to offer not only optimum environmental compatibility, but also the capability to complete an extensive multi-drop route without any impact on efficiency or service.

Lyreco matched the Master E-Tech to its detailed requirements based on the award-winning van’s combination of payload, value, comfort and usability. While its London-based vans will not cover a great deal of miles completing delivery routes, they will carry a significant amount of customer orders. With an average order weighing circa 40kg, it was essential for Lyreco that its choice of electric van had a payload of over 1,000kg. The Master E-Tech in Lyreco’s chosen long wheelbase and medium wheelbase formats have a payload of 1,300kg and 1,381kg, respectively, which even after adding floor and side cladding comfortably exceeds Lyreco’s payload requirements. The Master E-Tech provides the business with a range of up to 75 miles on a single charge (WLTP).

An additional benefit is the increase in driver comfort, the fully automatic transmission, near silent operation and instant torque of the Master E-Tech ensuring a more relaxing drive for Lyreco’s operatives when negotiating typical London traffic. In addition to fuel savings, Lyreco also gains financially from the vans being exempt from the Congestion Charge. 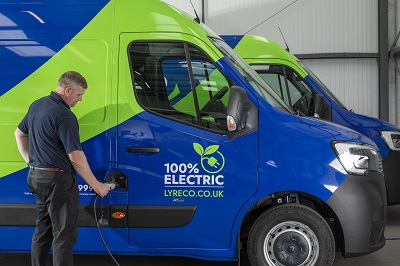 Notably, Lyreco’s decision to invest in the Master E-Tech was also influenced by its experience of Renault LCVs and the longstanding relationship it has with the French manufacturer. Of its 250-strong nationwide delivery fleet, 75 per cent of those rated at 3.5t are produced by Renault, with Lyreco having chosen the brand’s vehicles for over 10 years.

With distribution making up 44 per cent of the company’s total carbon footprint emissions and with a direct impact on customers’ carbon emissions, clearly this is a key milestone in Lyreco’s strategy to achieve carbon neutrality by 2030. Additionally, in 2019 Lyreco signed up to the Clean Van Commitment, which is a public commitment for fleets to switch to zero tailpipe emission vans in cities by 2028, and the new Master E-Tech vans will provide valuable insight into how Lyreco can transfer its learnings into the other UK territories in which it operates.

To highlight the 100 per cent electric power and zero-tailpipe-emissions-in-use of its latest vans, Lyreco has added a sustainable, environmentally friendly wrap. The vans have been supplied in Business specification, which includes such standard features as DAB radio, Bluetooth and USB, electric front windows, automatic headlights and wipers, ABS with EBD (Electronic Brake force Distribution, remote central locking, driver’s seat with height and lumbar adjustment and Z.E. Voice, which aids safety by emitting a range of sounds that signal the vehicle is moving.

Lyreco will charge its new vans via 7kW charge points that it has recently installed across its London distribution depots. With an 80 per cent charge being achievable in only 4.5 hours, it’s straightforward for Lyreco to keep its vans ‘topped-up’ between deliveries. To ensure its operatives also get the most enjoyment and convenience from its new Master E-Tech fleet, Lyreco has also invested in electric vehicle driver training.

The Master E-Tech order has been managed via ERA Fleet Cost Management, another long-term partner of the Lyreco fleet team, with the vehicles supplied by the fleet sales division of Renault Retail Group. 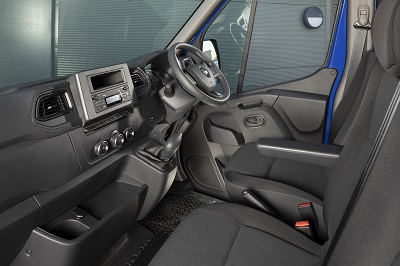 Richard Taylor, Head of Operations – Supply Chain, Lyreco UK & Ireland, said: “The purchase of Master E-Tech vans sends a clear message to our customers, our colleagues and the wider public, of our green credentials and commitment to sustainability. It means that where range and payload permits, our deliveries in London will be made by 100 per cent electric vehicles that will not contribute to air and noise pollution.

“Electric vans are currently the leading sustainable solution for our future operations and while the technology has been available for a couple of years, introducing any into our fleet before now would have been detrimental to our customer experience – the range and payload were simply not there. Making the transition to EVs had to work in every aspect and the Master E-Tech now ticks all the boxes. While we considered several different vans, it was also reassuring that we would be exploring such an important move into electrification with a brand that was a known quantity to us.”

Vincent Tourette, Managing Director, Renault UK, commented: “We are delighted that Lyreco has reaffirmed its confidence in Renault and the Master. It’s very exciting to play an important role in helping such a renowned business start its journey to a fully electrified fleet and especially pleasing that the Master E-Tech has met the company’s strict criteria for its busy London multi-drop operation. With the effectiveness of Lyreco’s vehicles being pivotal to its success, it’s a fine illustration of how the Master E-Tech is an excellent and highly usable LCV, regardless of the fact that it is also 100 per cent electric.”

The Renault Master E-Tech is available in a variety of body styles and, dependent on the version, weights of 3.1T and 3.5T. It offers a payload of up to 1,425kg in Panel Van format and can also be specified as a Chassis Cab or Platform Cab, these two versions forming the basis for several “tailor made” conversions – a Luton Low-Loader, Luton Box Van, Dropside and Tipper – that are available across the brand’s network of 150 dealerships. With a 33kWh battery, it provides an all-electric range of up to 75 miles (WLTP). When powered by a 7kW wallbox, a full charge is capable in as little as six hours. The Renault Master E-Tech is priced from £48,900 plus VAT after the Plug-in Van Grant.

Renault PRO+ now offers the widest range of all-electric commercial vehicles of any manufacturer. In addition to the Renault Master E-Tech and Renault Kangoo E-Tech, it also encompasses the Zoe Van E-Tech, which combines the equipment and 245-mile range of the passenger car version with a versatile payload of 457kg (Business trim). The Zoe Van E-Tech comes with a five-year/100,000-mile warranty and an eight-year/100,000-mile battery guarantee, while the other vans come with the reassurance of a standard three-year/100,000-mile warranty, with a battery guarantee of five years/60,000 miles.