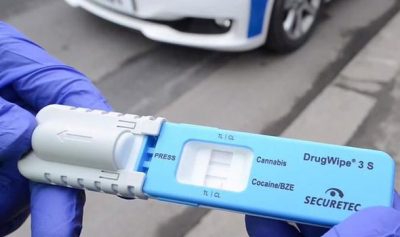 The stats – supplied by D.tec International, which supplies the ‘DrugWipe’ testing equipment to every police force in England, Wales and Scotland – show that in three police force areas during the first half of this year the combined number of drug drive arrests was 50% higher than those for drink driving.

In Essex in the period Jan – June 2020, at 1,323 there were more than double the number of drug drive prosecutions, compared to drink drive arrests (647).

The corresponding figures for West Yorkshire Police are almost parity with 1,235 (drug drive) and 1,178 (drink drive). Meanwhile, in Merseyside the figures are virtually double – 1,121 drug drive arrests and 570 for drink driving.

Ean Lewin, managing director of D.tec International, said: “I know I have been going on about the magnitude of drug drive versus drink drive for a number of years, but even I am shocked by the recent arrest figures for the first half of 2020.

“During the last few months during lockdown, it got even worse!

“We held a roundtable recently focusing on workplace drug and alcohol screening of return to work drivers and staff, with stakeholders including the police, Driving for Better Business, TTC, the Licence Bureau, Road Hauliers Association and several major fleet employers – and they all, to a person, were also shocked by the magnitude of the figures.

“By comparison, five years ago – before the introduction of the drug driving legislation – across the whole of England and Wales, the police made an average of 800 drug drive prosecutions per year.”

Ean Lewin adds: “The problem we are hearing about and seeing is that companies are bringing back employees from furlough and simply not looking at the drug and alcohol issues that have been created during lockdown.”

“The EMCDDA (European Monitoring Centre for Drugs and Drug Addiction) has been looking at this issue during the lock down period, and in an extensive report says that ‘those who use drink or drugs are now using more’.

“And, anecdotally, companies are seeing employees coming back who have ‘needed a crutch’ in the form of alcohol or drugs during lockdown – and are now asking for help to deal with the issue.”

“Health and safety hasn’t had a holiday and actively screening isn’t optional, so my message to employers is please review what you do, and ask if you need help or advice.”