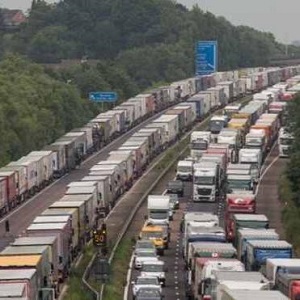 Plans to ease traffic for residents and businesses in Kent in the event of cross-Channel disruption have been unveiled by roads minister Jesse Norman.

The new plans for ‘Operation Stack’ will allow traffic to travel in both directions between junctions 8 and 9 while lorries are being queued for the Port of Dover and Eurotunnel. That means drivers can access these junctions, rather than being diverted onto smaller local roads.

This will be made possible using a contraflow on the northbound carriageway, which will be available for use by early 2019, if there is ever disruption to cross-Channel traffic and lorries have to be queued.

The Department for Transport is also setting out plans to improve overnight lorry parking, so that fewer lorries will be left on local roads or parked in lay-bys overnight.

Norman said: “We’ve seen the severe disruption that people in Kent had to face in 2015 when there were hold ups across the Channel. This interim plan will help to minimise that disruption and mean people will be able to go about their everyday lives, seeing friends and family or going to work, as well as businesses being able to get to their customers.”

A public consultation on a permanent solution to Operation Stack, led by Highways England, will be launched shortly. This will include asking residents, businesses and the freight industry whether they would rather see an on-road solution or an off-road lorry park.

Highways England will start work soon on improving the northbound hard shoulder of the M20, to allow for two-way traffic to be contained within one carriageway, enabling the road to remain open.

Schemes like the Dover Traffic Access Protocol (TAP), which sees lorries held outside of the port town instead of clogging up Dover’s centre roads, and more holding spaces at the port have helped to prevent many instances of Operation Stack being called since the events of 2015.

The Department for Transport is also looking at facilities for lorry parking, and has today published its National lorry parking survey, highlighting the areas around the country which need more overnight lorry parking provision.

Work to address this is already under way with plans from private developers for an extra 1,000 additional spaces across the country, which will provide benefits across the UK, particularly in the south-east.

The Government has asked Highways England to review and identify sites across its land holdings which could provide an extra 1,500 spaces, which would help reduce the number of lorries parking overnight in laybys.

Norman and planning minister Dominic Raab have written to planning authorities to draw their attention to the strategic need for more lorry parking nationally and to survey results showing shortages in specific areas.

Councils may also get further powers to take action against hauliers which park inappropriately.

The first six months of an 18-month trial on the A20 in Kent have seen the numbers of vehicles being clamped cut in half, and an increase in the number of lorry drivers staying in commercial parking sites.