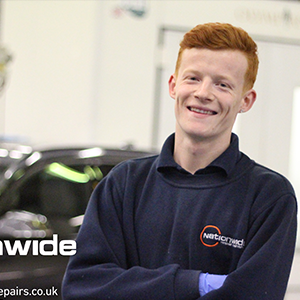 After weeks of nail-biting we can finally announce that Nationwide’s Daryl Head, former Paint Apprentice who works at Nationwide Swindon, has been selected to represent the UK and Nationwide as part of Team UK at the WorldSkills event in Abu Dhabi – the biggest skills excellence event in the world.

He will be competing in WorldSkills Automotive Refinishing, and we could not be more thrilled for him. The event runs from 14th-19th October and will showcase competition in 51 different skills.

In January we announced that Daryl had made it down to the final two in the WorldSkills squad, after finishing second in the National Skills Competition. In order to qualify for a place on the team in Abu Dhabi, Daryl has gone through months of training, including non-practical sessions on team building, leadership and how to deal with pressure in a competition environment, complimenting further support received from around the company and from fellow Nationwide team members.

For the past year Daryl has been training hard, and his programme has gone exceptionally well, seeing the necessary improvements where required. He said: “Team selection was held at 3M and, over a three day competition, I had to not only beat the other competitor but also hit the required standard set by WorldSkills UK.”

Daryl showed great skill and managed to beat out his competitor and qualify for a place on the team in Abu Dhabi, he said: “I found out the next day after a nerve-racking drive and long wait down at Slough College to see who was going to be going through to Abu Dhabi.”

The WorldSkills website refers to the Abu Dhabi 2017 competitors as “the best of the best” stating “they have already proven their exceptional talents, winning selection to the teams of the 77 WorldSkills Member countries and regions through qualifying skills competitions.”

Daryl said: “I would like to say thank you for all the support I have been given so far which has made achieving this position far easier.”

“Now, I am excited to see what comes next in my final training plan up to October, I have just found out this week my training managers are currently planning a pressure test in Russia next month against the Russian competitors so that will be interesting!”

Kevin Donnelly, Divisional Director for the South West & Wales, commented: “The entire Nationwide Team are delighted that Daryl has made it to WorldSkills in Abu Dhabi as part of Team UK. Daryl’s professional nature in his approach and workmanship means he is a credit to the business. Mark Nicholls and the team at Swindon have been fantastic in the support of Daryl on his WorldSkills journey, something that we are immensely proud of. We all wish him the best of luck in October and hope he can go all the way in the competition.”

Daryl is a great example of what hard work and determination can achieve. Nationwiders up and down the UK are following his story and we will offer him as much support and assistance as he needs and wish him the best of luck in the competition.

We will of course be keeping up-to-date on his progress, so lookout for further updates regarding how Daryl is getting on.