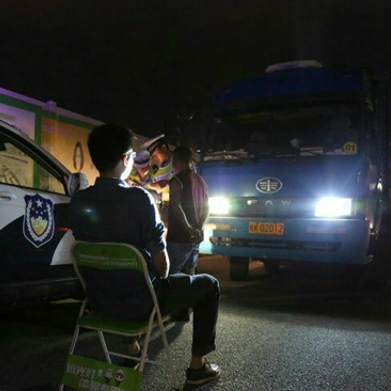 Police in Shenzhen have found an unusual way of punishing drivers who use their high beams to dazzle other road users; They must sit in front of headlights for one minute.

Shenzhen Traffic Police posted photos to their official Weibo account showing various people being made to sit in a special green chair placed directly in front of a car with its high beam headlights blasting directly toward their faces. The punishment also includes a fine of 300 yuan (£36) losing points on their license and being made to recite regulations on the proper use of headlights.

“Tonight we are carrying out punishments using a high beam,” the post reads. It’s racked up 87,000 likes and been shared 93,000 times. The photos show people sitting directly in front of a car with its headlights on.

Police in the Shenzhen province of China are no strangers to controversial methods; this particular approach to drivers misusing their lights was first used in 2004 and last year they made an example of jaywalkers by giving them a choice between paying a fine or wearing a green hat while directing traffic.

Many have shown their support for the Traffic Police on forums, one reader commented;

“I believe this kind of punishment is not right, it’s inhumane, they should have to look for 5 minutes,”

while another thought the practice should be expanded;

“The whole country should implement this immediately.”

Though support has been high for the officers, it hasn’t been universal with many concerned that the punishment may violate human rights or cause lasting damage to eyesight.

I can’t see this taking off around the world but it definitely seems to be an effective form of correction.