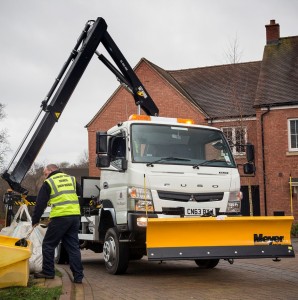 Banbury Council are preparing to keep the streets clear of ice and snow during the rest of winter with a new specially-equipped 4×4 FUSO Canter.

The 6.5tonne Canter 6C18 was supplied by Mercedes-Benz Dealer Euro Commercials (South Wales), and comes with a demountable snowplough blade and gritting hopper/spreader.

It is also fitted with a Neath Coachbuilders dropside body and a 5.0tonne/metre Hiab XS 055 crane, which is used to lift 1.0tonne bags of grit.

The vehicle has a three-seat Comfort cab and, thanks to its space-saving, cab-over-engine layout, is relatively compact and highly manoeuvrable.

Mike Hall, Recreation and Amenities Manager at Banbury Town Council, said: “The truck’s all-wheel drive capability means it will still be able to get around on snow and ice.

“It can also access small, residential roads to deliver bags of grit, and, when fitted with its demountable plough blade and hopper, undertake snow clearing and gritting operations.”

The FUSO Canter has a 175hp engine and five-speed manual gearbox with dashboard-mounted shift lever for easy cross-cab access.

Drive to the front axle can be selected or disengaged on the move, to maximise the engine’s fuel economy.

The 4×4 chassis is also significantly higher than standard Canter variants, the increased ground clearance allowing uneven terrain and steep slopes to be tackled.

“We’re very pleased with our 4×4 Canter, which is ideally suited to the primary role for which it was commissioned and will be used to undertake a variety of general tasks, some of them off road, during the rest of the year,” added Mr Hall.