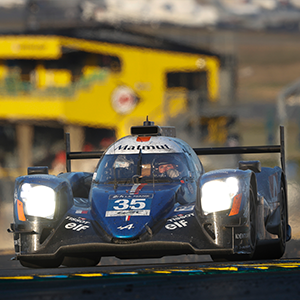 Packed with excitement and incident from start to finish, the 85th edition of the 24 Hours of Le Mans will certainly go down as one of the most memorable races in the event’s long history.

In stiflingly hot conditions, the 258,500 spectators witnessed a seemingly never-ending series of dramatic racing incidents, leading to the retirement of most of the favourites for outright victory. The LMP2s therefore found themselves in the limelight, since two of them finished in the top three of the overall standings.

On Saturday afternoon, the first bit of drama involved the no.36 Alpine A470. With around twenty minutes gone, Gustavo Menezes ran off onto the gravel at the end of the Mulsanne straight. The American was unable to get out of the gravel and had to wait for the stewards to help him on his way again. The team decided to alter their race strategy at this point and asked Matt Rao to complete a quadruple stint.

Comparatively speaking, the early stages of the race were much calmer for the no.35 car. Eighth on the starting grid, Nelson Panciatici immediately grabbed seventh place. Sticking religiously to the plan drawn up by the team, he established himself among the LMP2 frontrunners.

In the evening, the no.36 car was held up again. Romain Dumas had to come into the pits for half an hour whilst the mechanics changed the gearbox oil pump, which was damaged when Gustavo ran off onto the gravel. Then at around 11pm, Matt Rao also had to stop so that the team could fix an electrical issue.

At midnight, the no.36 was running in twentieth position in the LMP2 class. Meanwhile, the no.35 crew’s consistency was being rewarded with fifth place at that point. On the same lap as the category leaders, the trio of Panciatici, Ragues and Negrão were still in with a chance of victory!

Full of crashes and racing incidents leading to the activation of slow zones and safety car periods, the night went well for the Signatech Alpine Matmut team. By sunrise, the no.35 car had moved up into fourth position, whilst the no.36 had fought back to twelfth.

The heroic fightback continued throughout the morning: Panciatici, Ragues and Negrão managed to get past both the Vaillante Rebellion cars, which had set the pace in the first half of the race. With two hours to go, the no.35 car was not only running second in the LMP2 category, but was third in the overall standings!

In spite of the pressure put on him by his fellow countryman Nelson Piquet, André Negrão managed the situation perfectly. However, just 40 minutes from the end, the Brazilian’s front brakes failed, resulting in him running off onto the gravel. He was able to rejoin and then came into the pits, so that the mechanics could change the brake discs. The no.35 car ended up finishing fourth in the LMP2 category and fifth overall.

In the no.36 car, Romain Dumas grabbed ninth position in the LMP2 class, thanks to a strong pace in the closing stages and a perfectly scheduled and executed final pit stop. This result secured additional points, which might yet be vital in the FIA World Endurance Championship (WEC) at the end of the season.

“We won’t be forgetting this race in a hurry, that’s for sure. In the space of twenty-four hours, we experienced every possible emotion. Despite the difficulties, the team really stuck together to defend the values of Alpine, such as fighting spirit and panache. Right to the bitter end, we never gave up, as shown by the place gained by Romain Dumas in the closing laps. The mechanics, engineers and drivers, everyone did an absolutely amazing job. At the end of the day, the final result falls short of what we came here hoping to achieve, but sport can often be a humbling experience and we’ll be all the more determined at the next few races.”

“We experienced something of almost surreal moment when we saw our Alpine A470 in second position outright at the 24 Hours of Le Mans on the timing screens. Sadly, the dream didn’t last until the end and obviously, I’m frustrated by the final result. But we can have no regrets about the way in which we managed this race. We realised very quickly that we weren’t the fastest in the category. So we had to come up with solutions to stay in touch with the leaders. By saving fuel and looking after the tyres, we managed to switch our strategy to ten-lap stints instead of nine-lap stints. I have to congratulate the engineers who came up with this new strategy, as well as the mechanics who were absolutely brilliant during the unscheduled pits stop and repairs. I’m mainly disappointed by the fact that the result doesn’t fairly reflect the commitment and performance of the team.”

“It would have been fantastic to finish third overall in an LMP2, especially as we might not get another opportunity like this for some time. We weren’t the fastest on track in the category, but we drove without making any mistakes and our approach was beginning to pay dividends. I had a very good weekend with Pierre and André; we form a good crew and I think we have the potential to get other good results.”

“It’s a bit hard to take just missing out on a podium spot in the overall standings. It would have been a very special moment, for us as drivers and for the team. We knew that we were a bit slower during the day, when it was very hot, and we tried to push during the night. We also knew that the brakes were a critical point, but that we had to push. There was no indication that they were going to give up like that.”

“I’ll always remember this race, with this fantastic team. We didn’t make any mistakes: the driver and tyre changes, refuelling, everything went well until the brake problem cost us a place on the podium. It’s a shame, but we have to use this experience to be even stronger in future. I’m already looking forward to being at the Nürburgring to show what we can do again.”

“It’s always good to finish the 24 Hours of Le Mans. Our crew had a frustrating race, since we were fell behind in the opening minutes. We fought right to the very end, for the mechanics, for Alpine and also to support the no.35 car which had an incredible race. These things are part and parcel of racing, you just never know how things are going to turn out. It has nonetheless been a positive experience with Alpine, because the team has values that I hold very dearly.”

“The twenty-four hours of this year’s race seemed longer than last year! I feel really sorry for all the members of the team, they deserved a better result. I made a minor mistake at the start of the race, but it proved to be a very costly one. We then had other technical issues, but we refused to become disheartened. We were almost last at one point and yet we managed to finish in the category top 10 following a genuinely marathon effort!”

“Clearly, I feel a bit disappointed after our problems at the start of the race. But I’m pleased with our level of performance: we were consistently one of the fastest cars and I think we have the potential to challenge at the front. Everyone has worked tirelessly over the last few weeks and I would like to congratulate each and every member of the team.”