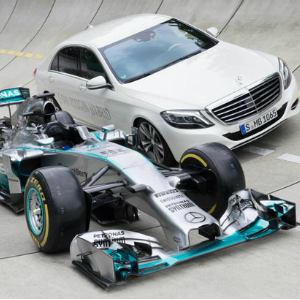 Winners of the government competition will develop ideas to cut vehicle emissions and help plug-in cars drive further. The innovative research project will use their share of the £38.2 Million prize money to investigate how Formula 1 (F1) technology can help make family cars lighter and improve fuel efficiency.

The project is one of more than 130 car manufacturers, technology companies and research centres across the country to have won a share of the money, announced in the Budget, which will create hi-tech jobs and help Britain become a global leader in exporting state of the art, emission-cutting technology.

A consortium including Jaguar Land Rover and Nissan has received £1.7 million for ‘light weighting’ technology – applying the science behind F1 cars and space satellites to make passenger cars weigh less and be more fuel efficient. The results could reduce the weight of steel components in vehicles such as the Nissan Leaf by more than half, potentially extending the distance a plug-in car can drive by up to 25%.

Our £38 million investment will help Britain become a world leader in this exciting and valuable technology sector, creating skilled jobs of the future as part of our long-term economic plan. It will also mean lower running costs for motorists and less fuel consumption, which is good for the environment and our economy.

This competition continues our £600 million commitment by 2020 to support the uptake of ultra-low emission vehicles, making journeys cheaper and greener, ensuring the nation is fit for the future.

The winning projects were chosen following a competition launched last September (2015) encouraging companies to propose innovative ideas to cut vehicle emissions. The funding combines £30 million from the Office for Low Emission Vehicles (OLEV) with £8.2 million of additional funding fromInnovate UK, who will support the schemes.

They will begin unveiling working prototypes by 2018 and could feature in passenger cars from 2020.

UK businesses have a great opportunity to be at the leading edge of the global drive to increase efficiency and reduce emissions from our vehicles. This £38 million of government support means that more than 130 innovative organisations right across the country now have the chance to get their ideas off the drawing board and potentially into the cars and trucks of the future, boosting the economy by at least £532 million in the process.

The OLEV research and development fund will award funding to over 130 companies and research organisations across the UK including:

-£7.6 million for 36 organisations across the West Midlands

-£7.5 million across 23 organisations in the East Midlands to explore how to replace steel bodies with lighter materials while maintaining the highest safety standards.

-£1.7 million in the North West to 7 Organisations including Clean Air Power Ltd in Lancashire who will seek to apply greener dual-fuel technology to HGVs, cutting emissions on freight deliveries.

-£2.9 million across the East of England where Essex based company Controlled Power Technologies Ltd in will leads a project to develop a low-cost hybrid system suitable for capturing braking energy and providing an extra boost to smaller city cars.

-Greater London has been assigned £2.2 million across 11 organisations to develop thermal recovery kits that capture waste heat from the exhaust and turn it into electricity.

-The South west will receive £3.1 million for a project developing new lighter vehicle components made from advanced aluminium alloys.

-That leaves the North East who will be handed a measly £570,000 for a light weighting collaboration with Jaguar Land Rover.

As fantastic as it is to have this kind of longterm investment into improving vehicles which will benefit businesses and individuals alike, it is strikingly obvious that once again the majority of the funding will be allocated to the South and Midlands with the North East especially being doled an amount which is pocket money by comparison.

Let us know your thoughts on this division of the prize money- does it just make sense for the majority to be given to the South or is the North being left behind on investments again?