The world’s top 10 car manufacturers submitting the most patents

Every year, car brands submit thousands of patents to protect their technology – giving them the sole right to use and implement it in their cars. This has become more important than ever due to the move to electric and eventually autonomous driving.

Using Google Patents, which draws data from more than 100 of the biggest patent offices from around the world, Bristol Street Motors has revealed which car brands are driving automotive innovation and who is investing the most into electric and autonomous technologies.

Toyota has submitted over 384,000 patents over the past decade, the most of any car brand

Toyota has submitted the most patents over the last 10 years. Since the beginning of 2011, they have submitted over 380,000 patents, an average of around 31,650 per year. This is double the amount of their closest rival in this regard, Hyundai, that submitted around 184,000 patents.

The top 10 list is dominated by car brands hailing from Asia, with Toyota, Hyundai, Honda and Nissan all featuring in the top 5 positions. According to Freshfields Bruckhaus Deringer, one of the largest law firms in the world, “Automotive is now the third most active sector for worldwide patent filings behind telecoms and computing – and the rate of growth is faster than in any other industry.”

Ford is pushing autonomous technology more than any other car company

Autonomous technology in the automotive industry may still be some way off yet, but that hasn’t stopped the world’s leading car brands from patenting their technological research. Ford is the industry leader in this regard. In 2011, the car brand submitted 330 patents. However, fast forward to 2020 and Ford has submitted a combined total of 14,354 automotive patents over the last decade. 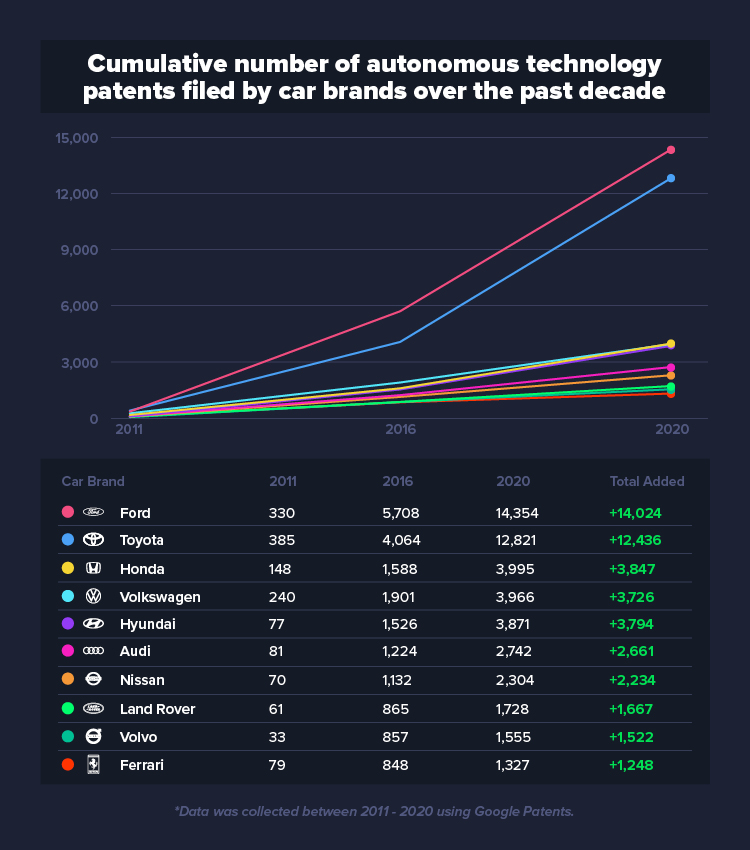 Toyota is lightyears ahead of the competition when it comes to patent filings for electric tech, showing a keen interest in the sector. Over the past 10 years, the car company has submitted over 143,000 electric-focused patents, more than double of any other car brand.

Bristol Street Motors also noticed that there has been a substantial decrease in the number of patents filed over the last two years. Each car brand studied had decreased the number of patents filed by over 90%, with Renault dropping their submission by a huge 99.5%. We also cross checked this information using the European Patent Office’s Espacenet to confirm these findings.

It’s the same across the board, even for those that didn’t make the top 10 list above. The least impacted by this phenomenon is BMW, but the car brand still decreased their patent filings by a sizeable 70.4%.

One can only speculate the reasoning behind this, with the COVID-19 pandemic potentially having a major impact on manufacturers ability to work due to lockdowns in numerous major countries since March.