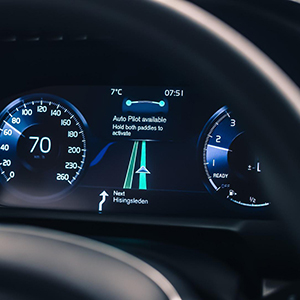 Volvo Cars has revealed one of the industry’s most advanced and easy-to-use interfaces to oversee how drivers will transfer control to a car’s autonomous driving (AD) mode in its forthcoming cars.

The advent of autonomous driving technology means that the relationship between a driver and a car’s user interface is of crucial significance. A safe and seamless handover of control is the cornerstone of any new trustworthy AD technology.

Volvo Cars has designed its IntelliSafe Auto Pilot to be simple and intuitive. The autonomous mode is activated and deactivated with specially-designed paddles on the steering wheel.

When entering a route where autonomous driving is available, the car gives the driver a message that the Auto Pilot is ready. At the same time, lights on the steering-wheel paddles start flashing.

The driver pulls both paddles simultaneously to activate autonomous mode. The lights on the paddles then change to constant green and Auto Pilot confirms that the driving and the supervision has been delegated to the car.

When autonomous driving is no longer available, the driver is prompted to take over again. A sixty-second countdown is displayed.

If the driver, for any reason, doesn’t use the paddles to regain control within this minute, the car will bring itself to a safe stop.

Thomas Ingenlath, SVP Design at Volvo Cars, said: “We have designed a user interface that is safe and seamless to use so that drivers can confidently transfer and regain control of the car.”

Drive Me will make 100 self-driving Volvos available to families and commuters around Gothenburg for use in everyday driving conditions. The cars will be driven autonomously on approximately 50 kilometres of selected roads.

Following its use in Drive Me, the IntelliSafe Auto Pilot will then be introduced to the general public.