As the business continues to grow apace, leading independent Renault trucks distributor RH Commercial Vehicles (RHCV) has invested in a new brand image which better reflects the company’s growth within the transport sector. 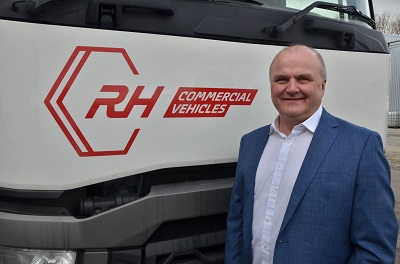 RHCV has unveiled a bold new logo and corporate identity which is currently being rolled out across the operation’s five sites, a fleet of 200 truck rental vehicles and updating its corporate workwear, signage and a brand new website.

The previous branding was a legacy from when RHCV  was part of the freight and logistics group, RH Freight, when RHCV adopted the same logo as its parent but in red and black instead of RH Freight’s green.

RHCV has changed dramatically over the past decade, from when it was part of The RH Group of companies, from one site in Nottingham, to now five sites across the East Midlands and a team of 140.  Originally founded in 1977, RHCV has in the last three years expanded into Northamptonshire, broadened its offer with Isuzu, opened a brand new £3.5m facility in Nottingham and invested £70,000 in its Leicester site as well as recently announcing its new site in Tuxford, just outside Newark.

Nigel Baxter, Managing Director at RHCV comments: “We are a completely different business today from that which was a subsidiary to RH Freight, and it is time for a fresh new look which better reflects our business and our continuing and ambitious growth plans.

“The new logo is an evolution not a revolution,and remains sympathetic to our heritage. We have retained the original red but with a look which is now streamlined and more contemporary, it is also vitally important that the new branding also complemented both our partners, Renault Trucks and Isuzu logos.”

The new brand has been many months in development and its heart is a brand new, fully interactive website, which will be unveiled next month.

Nigel added “The new look signals an important step in our progression as a business, including the new website.  In an increasingly digital world, it is vital that we maximise online activity, making customer bookings easier as well as the ability to search for new and used vehicles online, these are just two of the new functions that our new website will offer.

“It’s hugely important that we continue to invest in and develop our business whilst retaining our core values of quality, service and commitment to delivering for our customers.”

Formed in 1977, RHCV has been a Renault Trucks dealer since 1986. Earlier in the year RHCV announced the opening of a new fifth site, strategically located in North Nottinghamshire.