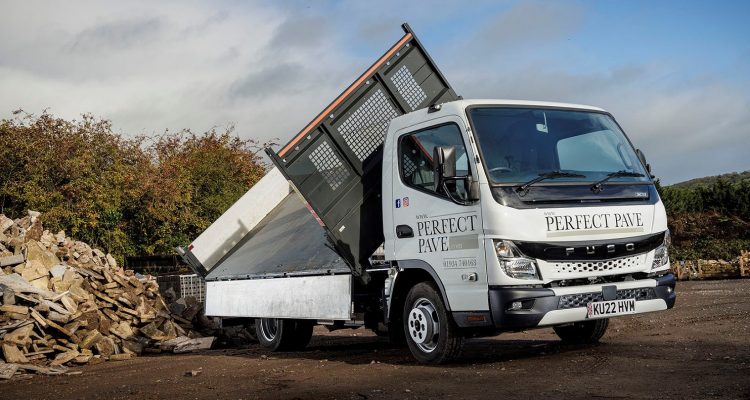 “A no-nonsense workhorse, that’s what we need and that’s what we get with the FUSO Canter.” So says Alex Howley, whose Somerset company Perfect Pave has just commissioned its first vehicle from the all-new Canter range. 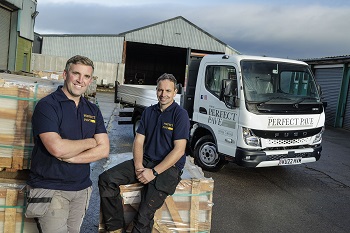 The 3C13 variant was supplied by Intercounty Truck & Van, which also sells and supports Mercedes-Benz trucks – both brands are part of the Daimler Truck ‘family’. It has a Comfort cab and Scattolini three-way tipping body, which was pre-fitted at the FUSO factory in Tramagal, Portugal, and is now working alongside the operator’s four other 3.5-tonne Canters, all of which are standard tippers.

Perfect Pave specialises in the installation of patios and driveways, including block paving, while also offering a variety of complementary services. Mr Howley and his co-Director Simon Bethell celebrated the 20th anniversary of their business in May.

Although Perfect Pave serves trade customers nationwide, the Canters work within a 50-mile radius of its base in Cheddar. The company’s eleventh FUSO – it purchased the first in 2006 – replaces an 09-registered example that had covered 160,000 miles.

The redesigned cab, which features a striking new ‘face’, easily distinguishes the all-new Canter from its predecessor. The latest model is more comfortable than the last, thanks in part to the improved insulation that reduces in-cab noise, and safer too, with additional, reinforced rear underrun protection helping to minimise the effects of impacts. 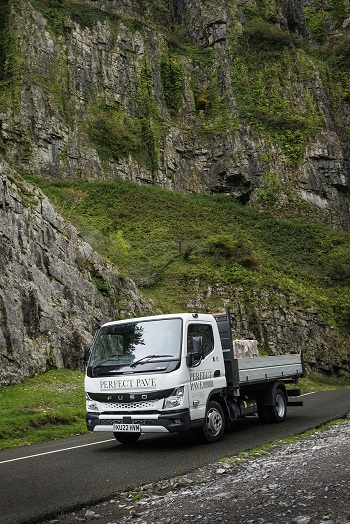 The company switched to the Canter after being repeatedly let down by its previous, van-based 3.5-tonners. Alex Howley recalled: “We were attracted by the trusted brand name and the promise of ‘bombproof’ Japanese engineering.

“It has proved to be a wise decision, because the Canter is ideally suited to our kind of work. It’s a rugged and durable utility vehicle, and it doesn’t pretend to be anything else. Of course, it has all the safety aids the operator wants to see, as well as features the drivers like, such as Bluetooth phone connectivity. But there’s nothing on the vehicle that isn’t needed and is going to be a frustration if it goes wrong.”

He continued: “In very simple terms, the Canter does the job we need it to do, and it does it day in, day out. That reliability is crucial. We have five on the fleet and we want five installation teams out there working. If a vehicle misbehaves and won’t start, the guys are going to be twiddling their thumbs and we’ll lose revenue. With the Canter, that never happens.”

Simon Bethell commented: “Unlike other 3.5-tonners, the Canter has a cab that is clearly designed for commercial work, in being easily cleaned and spacious. Our teams usually work in pairs, but we always have the option of sending three out in safety and comfort. We trialled another cab-over-engine vehicle by one of FUSO’s competitors a while back, and it was so narrow that the lads were like sardines in a can, with no room for rucksacks, lunchboxes and so on.”

Turning to the latest arrival, he observed: “We’re impressed with the further improvements to comfort and safety on the latest Canter. The new seat belt reminder, for example, is a nice touch. The temptation, maybe when they’re nipping five minutes down the road to grab something from a builders’ merchant, might be for the guys to not put their belts on. But they’ll do so in the new vehicle, just to stop the alarm pinging. This may be a minor irritation for them, but it gives my business partner and I, as employers with a Duty of Care, that little bit more peace of mind.”

Perfect Pave aims to run its Canters for five years although, as Mr Bethell explained: “We still have a couple that are a little longer in the tooth. The oldest is on a 16-plate. It’s covered 77,000 miles and is still as good as gold. The 09-registered truck was sold privately – to be honest, though, we’d spent so little on it that we’d happily have given it away.”

The FUSOs are maintained alongside its larger trucks in the company’s own workshop. “Our fitter finds them very easy to work on, not least because the cab tips forward so the entire engine is easily accessible. We buy parts from our local Dealer, whose service is very good.”

Acquired with funding support from Daimler Truck Financial Services UK, Perfect Pave’s new Canter is the first it has bought from Intercounty Truck & Van. The order was managed by the Dealer’s FUSO Sales Manager Matteo Mirabile.

“I initially contacted Matteo through Instagram, where he was advertising trucks for sale,” said Alex Howley. “He posts regularly on social media and produces some very good promotional videos.

“Matteo kept us posted on progress throughout. At one point our vehicle was delayed at the factory and it’s to his credit that he was straight on the phone to break the news to me, rather than just disappearing into the ether as some other salesmen might. We’ve bought from various Dealers in the past and Matteo’s service was right up there with the best – not only is he professional, but he’s also a very nice guy to do business with.”