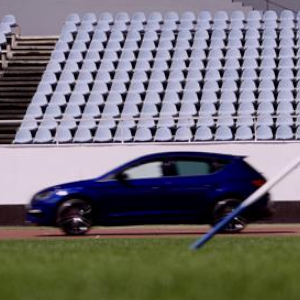 The CUPRA performance brand has always represented the fastest and most dynamic interpretations of the SEAT range, but can it beat a world champion?

Both car and javelin would race side-by-side over a 70-metre sprint, to see if the athlete or the car would be on top of the podium.

With 300hp from its 2.0 TSI engine the CUPRA is capable of Olympic-sized feats of acceleration, blasting to 62 mph from rest in only 4.9 seconds and setting a record for the fastest front-wheel-drive hatchback around the infamous Nurburgring. Yet SEAT brand ambassador Barbora, 6ft tall and a former heptathlete at junior level, is capable of propelling her javelin at over 56mph – and has held the women’s javelin world record of 72.28m since 2008.

The two athletes were brought together in the Czech republic’s National Football Stadium to find out which would reach the finish line first – Barbora’s javelin or the Leon CUPRA? With both car and spear launching at the traditional sound of the starter’s pistol, the Leon CUPRA went head-to-head in a best of three contest – but which would prove most successful at cutting through the air?

Preparing the Leon for the challenge is a simple matter of engaging the special CUPRA mode on the SEAT Drive Profile, ensuring the sharpest throttle response and the quickest possible gearchanges from the DSG gearbox. In contrast, Barbora’s preparation requires a little more care and attention. “In order to concentrate on what my body is going to do, my mind has to be completely blank. I focus on a spot on the other side of the stadium and virtually project my throw over there” she explains.

On the first throw Barbora clocked over 50 mph with her throw, covering the 60 metres to the finish line in a fraction over five seconds. But it’s wasn’t quick enough to beat the CUPRA – the car took a 1-0 lead.

Throw two and Barbora raised the bar. Spearing out of her hand at more than 23ft per second, the Javelin thudded into the turf having crossed finish line a matter of inches in front of the CUPRA, despite it repeating its 62 mph rapid sprint time.

With the score dead level at one victory each, honour is at stake as the starter raises his pistol for the final time. A perfect launch for the car is matched by Barbora’s throw, sending her javelin soaring at 56mph through the air – but it’s not enough to defeat the Leon CUPRA, which blasts across the line ahead of the spear. A closely fought contest, and one that underlines the credentials of both human and machine.

Magnanimous in defeat, Barbora has always been happy to take on any kind of challenge: “Two that stand out are returning to sports after the birth of my son, and training for the 2016 Rio Olympic Games following an injury just five months before competing. My life is full of challenges”.