WATCH: Motorist banned for driving at 60mph with no hands 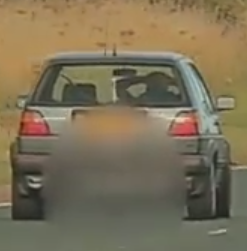 BANNED: Motorist drove at 60mph with no hands

A Yorkshire man has been banned from driving for 12months after a police camera van caught him driving at 60mph with NO HANDS.

Richard Newton, 36, of Abbots Road, Whitby, was snapped in the act by North Yorkshire Police on the A171 at around 6.20pm on August 9 last year.

He was filmed driving past the safety camera van with both hands on his head, continuing along the busy ‘A’-road for around 25seconds at between 60mph to 63mph.

Newton was found guilty at Scarborough Magistrates’ Court of dangerous driving, and ordered to carry out 100hours of unpaid community work and fined £625 with a £60 surcharge.

Dave Brown, of North Yorkshire Police, said: “This case demonstrates two things, one is the sheer stupidity of some people who put others in danger, and the other is the ability of our safety camera to capture a range of offences.

“This is yet another case which shows that these cameras are about safety and not just speeding.

“We will take action against all manner of offences to ensure we keep our roads as safe as possible for everyone.”