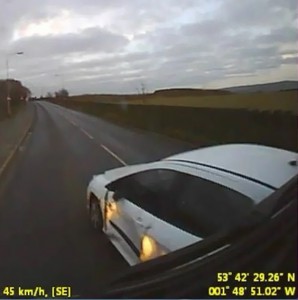 An in-cab dash cam has caught the moment three vehicles narrowly avoid a head-on smash due to the reckless overtaking of one driver.

The SmartWitness footage, seen below, shows a white car failing to spot an oncoming vehicle when attempting to overtake a lorry on a quiet country road.

A horrific three-way collision is avoided only be the narrowest of margins, with the driver pulling over after the incident.

Simon Marsh, Managing Director of SmartWitness, said: “It’s a miracle that there wasn’t a three-way collision – I’ve never seen a closer head-on near-miss caught on our cameras and the actions of the driver of the white car were crazy.

“Footage like this is vital in improving driver safety.

“We encourage and train our clients to use our cameras to educate their own drivers as well as to guard against the recklessness and sometimes false allegations of other drivers.

“Clearly the HGV driver in this case was blameless but it’s amazing how effective the footage is in improving driver behaviour.

“We find clients are now more than ever using footage to train drivers and improve road safety.”

Mr Marsh previously owned a transport company with 200 vehicles and tragically lost two of his employees in separate incidents in 2005 and 2006.

“I have always been keen to be the first to trial and use any products which improve safety,” he added.

“When I was running my own fleet I spent tens of thousands on new developments including at the time, Lane Departure Warning, Proximity and Active Braking.

“But the key message to all drivers is to avoid events that will lead to incidents in the first place – and the best way to do that is to modify a driver’s behaviour.”