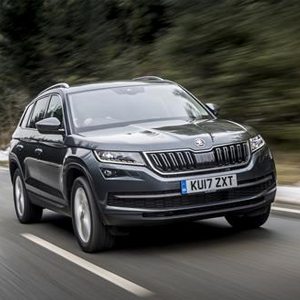 ŠKODA’s award-winning Kodiaq range is set to earn its badges with the arrival of a new Scout model.

Priced from £32,330 and positioned between the SE L and Edition models, the Scout is the first new addition to the Kodiaq range since the seven-seater SUV arrived earlier this year.

To meet anticipated customer demand, the Scout is available with six engine and transmission options, all of which feature four-wheel drive. The engine range consists of two petrol offerings, a 1.4 TSI unit that produces 150PS and a 2.0 TSI unit that generates 180PS. The 1.4 TSI is equipped with a six-speed manual transmission as standard with a seven-speed DSG available as an option, while the 2.0 TSI features a seven-speed DSG as standard.

Customers opting for diesel can choose between two 2.0 TDI units with outputs of 150PS and 190PS. The 150PS version offers the choice of a standard six-speed manual gearbox or a seven-speed DSG while the range-topping 190PS version is equipped with a seven-speed DSG as standard.

In keeping with ŠKODA Scout models, the Kodiaq Scout comes with a tent-full of special features that mark it apart from other models in the range. The bespoke exterior design package includes special Scout off-road front and rear bumpers, a rear diffuser, Scout plaques on the front wings and silver door mirrors. 19-inch Crater Anthracite alloy wheels complete the rugged new look.

Inside, the Kodiaq Scout features Alcantara trimmed seats and door panels, along with wood finish dashboard and door inserts and a Scout plaque on the dashboard. Equipped with seven seats as standard, Scout cabin also features aluminium trimmed pedals and LED ambient lighting.

As befits a model bearing the Scout badge, the newest member of the Kodiaq family is ideally equipped for adventures off the beaten track. All models are equipped with an off-road mode that adapts the chassis, engine and brake settings for rough terrain. It also engages Hill Descent Assist on steep downhill slopes, holding the car at a safe speed while it’s descending. The Scout also features a ‘rough road package’ as standard that includes a tough engine guard and underbody stone guard.