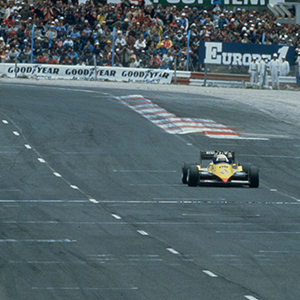 Renault is proud to start the 40th anniversary celebrations of its Formula 1 debut over the course of this weekend’s Formula 1 Monaco Grand Prix.

Renault’s Formula 1 debut came at the 1977 British Grand Prix where Jean-Pierre Jabouille unleashed the first-ever turbo-charged Formula 1 car, the RS01. Jabouille will be reunited with the RS01 to drive laps of the Monaco track on Friday 26thMay.

Highlighting the unique expertise Renault has gained in the course of the 40 years since its Formula 1 debut Renault Sport Formula One Team driver, Nico Hülkenberg, will drive the eagerly anticipated All-New Mégane R.S in its first official public appearance. Due to be released at the 2017 Frankfurt Motor Show, the All-New Mégane R.S. will be presented in a special yellow and black livery.

Renault Sport Formula One Team plans a number of events to highlight Renault’s forty-year Formula 1 provenance, with celebration partner initiatives and the presence of guests who have played an active role in Renault’s Formula 1 success.

Jérôme Stoll, President of Renault Sport Racing:
“Renault is proud of its position as one of the most historic brands in Formula 1. Over the past forty years our involvement has taken many forms, ranging from the ground-breaking RS01 V6 Turbo, the V10 engine, through the record-breaking V8 era through to our current venture with Renault Sport Formula One Team.

We have not only gained a tremendous amount of success, knowledge, expertise and experience over these years, we have helped contribute to the sport as it is today. In Monaco we will celebrate our forty year history, however our focus is firmly on the future.

We recently showcased our vision of a potential Formula 1 future with the R.S.2027 Vision and we are dedicated to our ongoing role in Formula 1. Here’s to the next forty years!”

Cyril Abiteboul, Renault Sport Racing Managing Director:
“Monaco is an iconic venue infused with Formula 1 history, what better place to start our celebrations of forty years than here? Formula 1 is a technological and human adventure to which Renault brings tremendous passion.

Over the past forty years we have used Formula 1 as a laboratory for testing new technical innovations, such as the introduction of the turbo-charger to the sport with our very first Formula 1 car, the RS01. We are proud to reunite Jean-Pierre Jabouille once more with his RS01 as well as Alain Prost, who will drive our first all-carbon fibre chassis, his RE 40, in which he came so close to claiming the 1983 World Championship.

Our technical innovations on track provide inspiration and advancement for our road products, and we showcase the latest manifestation of this with the first glimpse of the exciting All-New Mégane Renault Sport with Nico Hülkenberg. There will be more highlights with encounters, reunions and exchanges that are at the heart of F1 through the years. Finally, we hope we can harness the force of our forty-year history for a strong result this weekend in Monaco.”