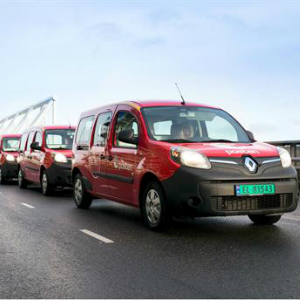 The Kangoo Maxi Z.E. is well-suited to the everyday tasks of many business types, including administrative and courier companies, thanks to its official range of 106 miles (NEDC), which Renault estimates to be between 53 and 84 miles in the real world, depending on ambient temperature and driving conditions. Posten’s red Kangoo Maxi Z.E.s will mostly be used in areas of high population density.

Posten, which already has a fleet of 900 electric vehicles (cars, bikes, quadricycles, trailers), is taking a further step forward in environmental responsibility with the purchase of Kangoo Maxi Z.E. The service is targeting a 40 per cent reduction in its CO2 emissions by 2020, a substantial measure considering Posten alone accounts for no less than one per cent of CO2 emissions in Norway as a whole.

In Norway, electric cars are exempt from VAT and road tax. They pay no parking fees, road tolls or ferry charges, and they are entitled to use bus lanes.

The Renault electric vehicle line-up in the UK consists of Twizy, ZOE and Kangoo Van Z.E. all providing zero emissions in use motoring, a silent and calming driving experience and strong electric power delivery at all speeds.

The Renault Twizy urban runaround is unlike any other vehicle on sale today. The innovative two-seater is available in three trim levels; Expression, Dynamique and Cargo – a one-seater version, with a 180-litre lockable boot, perfect for small urban delivery companies.

Awarded the titles of What Car? 2015 ‘Best Electric Car for less than £20,000’ and ‘Best Electric Vehicle’ in the Auto Express Driver Power 2015 survey, the Renault ZOE is a 5-door hatchback that has been designed from the ground-up to offer all the advantages of a practical supermini, including a 5-star Euro NCAP safety rating, with the environmental and running cost savings of a pure electric vehicle.

Renault is the pioneer of affordable all-electric vehicles, and the only carmaker to offer a full range. Renault sees the electric vehicle as an eminently viable countermeasure against global warming.

The Renault-Nissan Alliance is an official partner of the COP21 United Nations climate-change summit, providing a fleet of 200 Alliance electric vehicles, including 100 Renault ZOEs, to shuttle delegates between Paris and Le Bourget from 30 November to 11 December 2015.