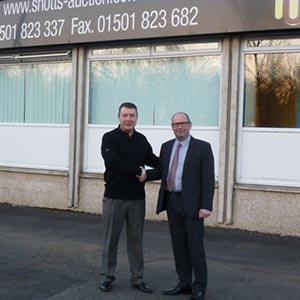 The family-run business, whose ten-acre site is based between Edinburgh and Glasgow, has been purchased by Manheim as part of the US giant’s commitment to Scotland’s used vehicle market.

Shotts, who were established in 1989, boast two auction lanes and undercover storage for up to 250 vehicles.

All management team and colleagues will be transferred as Manheim employees under TUPE regulations, with Ian Irvine, Managing Director of Shotts, appointed Regional Director for Manheim Scotland.

In his new role, Mr Irvine is responsible for business development and service delivery across both the former Shotts site, as well as Manheim’s Glasgow site.

“We’re absolutely delighted to have acquired Shotts, which will significantly build our total offering in Scotland.”

Michael Buxton, Chief Operating Officer of Manheim UK, said: “We have for some months been exploring ways we can better serve our vendor and buyer customers north of the border.

“We’re absolutely delighted to have acquired Shotts, which will significantly build our total offering in Scotland.

“The skills, knowledge and expertise of the Shotts people are second-to-none and we wanted to retain that talent as a key element of the acquisition process.

“After some weeks of inevitable uncertainty, we’re pleased to have confirmed this deal which is good news for the motor trade in Scotland.”

Mr Irvine added: “Having considered all of the options, I know that our decision to join the Manheim family is the right one for the Shotts Motor Auctions business.

“Being part of the world’s biggest vehicle remarketing business gives us the assurance, insight and financial backing to grow Manheim’s market share in Scotland.

“Looking ahead, it is business as usual for us – we have our next cars/light commercials sale on March 18.

“In the longer term, we will be developing a series of services that meet the needs of customers in the region.

“It’s an incredibly exciting time for us and we’re looking forward to being part of building Manheim’s presence and influence in the Scottish used vehicle marketplace.”