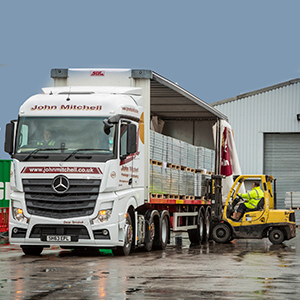 Mercedes-Benz Dealer Western Commercial have gained a toe-hold in the fleet of John Mitchell Haulage and Warehousing, one of Scotland’s best-known transport companies.

Iain Mitchell, Managing Director of John Mitchell, said: “We’d seen and heard a lot of good reports about the New Actros in the trade press and elsewhere, particularly with regard to its fuel economy.

“So we decided it was time to try one for ourselves.”

The vehicle has joined John Mitchell’s fleet of more than 100 top-weight tractor units, which is currently dominated by a rival manufacturer.

Its performance – and that of the dealer – is now being closely evaluated.

The New Actros is on general haulage duties with one of John Mitchell’s new SDC curtainside trailers, carrying a wide range of goods across Scotland and the north of England.

“It’s working fully freighted over some challenging terrain so we’re very pleased that the returns have already reached 8.5mpg, which compares well to our fleet average,” added Mr Mitchell.

“The truck is running well, there have been no ‘niggles’ and the ordering and delivery process went very smoothly.

“We’ll continue to monitor the quality of back-up but so far the team at Western Commercial’s Edinburgh dealership have looked after us extremely well.

“I hear nothing negative about the truck or the dealer and at John Mitchell that’s the way we like it.”

“We have an ongoing dialogue with our customers and all the feedback we’ve received tells us that the new range is performing superbly.

“The recent acquisition of this New Actros by John Mitchell is something we are very pleased about here at Milton Keynes and at Western Commercial, and we are excited to see how it performs against the existing fleet.”