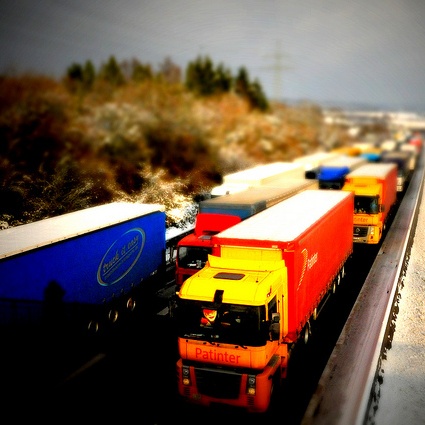 Foreign hauliers are now being charged to use UK roads for the first time ever.

The HGV Road User Levy – which is being introduced one year ahead of schedule – is aimed at helping British hauliers compete better with their foreign counterparts.

It has long been called for by the UK haulage industry, and affects all HGVs of 12tonnes or more that drive on UK roads.

The levy is structured in a series of bands which reflect vehicle type, weight and number of axles, with UK operators paying at the same time as VED.

“The HGV Levy will provide a massive boost for the UK haulage industry.”

“It will create a level playing field across Europe, giving UK firms a much better opportunity to win business.

“This is yet another example of how we are taking positive action to back British business and build a stronger, more competitive economy.”

The move has been welcomed by bodies from across the industry, including the British Vehicle Rental and Leasing Association (BVRLA), Freight Transport Association (FTA) and Road Haulage Association (RHA).

Jay Parmar, Legal and Policy Director at the BVRLA, said: “This levy will help redress the unfair competition that UK hauliers have faced from their European counterparts, but it is vital that the new regime is robustly enforced across the UK.

“The government responded to our calls for tougher penalties for non-payers, but we feel that increasing the fine from £100 to £300 will not be enough of a deterrent to stop some hauliers chancing their arm.

“We would also like to see the Driver & Vehicle Services Agency (DVSA), Driver and Vehicle Agency (DVA) and police being given more resources to enforce the new levy.

“As well as enforcement cameras, we need extra officers on the roadside to collect penalties from foreign hauliers.”

Karen Dee, Director of Policy at the FTA, added: “FTA has consistently supported the introduction of the HGV Road User Levy.

“Until now operators of foreign HGVs have paid nothing in UK taxes.

“They pay vehicle tax in their own country, and buy low-taxed diesel before entering the UK, and in so doing save up to £200 on a full tank of fuel.

“The levy won’t fully redress this imbalance in costs, but it does create a fairer arrangement for UK operators.”