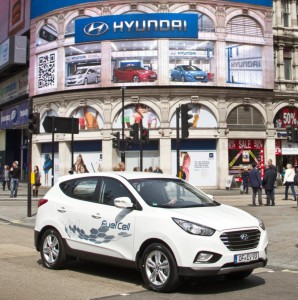 Emission-free hydrogen-powered Hyundai vehicles – the first of their type ever to be produced – will soon be operating in London.

Offering up to 369miles of range, with easy refuel and strong practicality, the models will help London become a global centre for hydrogen and fuel cell vehicle activity.

Comparable to non-hydrogen vehicles, the cars can travel at 100mph maximum and 0-62mph in 12.5seconds, with refuelling taking just two to three minutes.

The LHNE project, a government-backed initiative co-funded by the Technology Strategy Board, places hydrogen-fuelled vehicles into daily business use, delivering the refuelling infrastructure to support their operation.

These fuel cell vehicles will be leased to key public and private fleet users in the capital.

“Battery electric vehicles are a great technology but like the fax machine they are only temporary and there is a great deal of consumer resistance towards them for all manner of reasons, including range and the time it takes to recharge them.

“Even though we have around 1,300 charging points in the capital you cannot guarantee getting a space outside your house to charge overnight: London is just too densely populated.

“For me, hydrogen cracks all those problems and it also solves other issues along the way such as making best use of wind energy, for example.

“We also produce a huge amount of waste and we are looking at schemes that convert biomass into hydrogen.

“So as well as producing a clean fuel we would be reducing the amount of waste we put into landfill.

“These are early days, but I am tremendously excited by the prospects of London’s hydrogen future.

Hyundai have been developing Fuel Cell vehicles for more than 15 years, but can only now go into production with the launch of a viable hydrogen refuelling network.

A further three London fuelling stations are planned by 2015, by which time it is expected that the number of fuel cell vehicles will have to at least 50.

Hyundai expect to commit 1,000 examples to manufacture between now and 2015.

Most will be available in Europe, where the European Commission has established a number of schemes to promote the use of hydrogen as an energy carrier.

Tony Whitehorn, President and CEO of Hyundai Motor UK, added: “Hydrogen delivers considerable environmental benefits and we are looking forward to working closely with the other partners to drive forward its widespread introduction.”

The London Hydrogen Partnership has initiated more than £50million worth of hydrogen projects already.