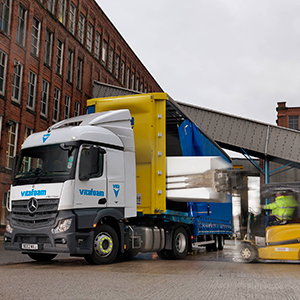 They were supplied by Enza, and have narrow, 2.3metre-wide versions of the StreamSpace cab and straight six engines.

“Our drivers have undergone Mercedes-Benz training and love their New Actros, which look great on the road.”

Dave Leigh, Transport Manager at Vita Group, said: “We invited four manufacturers to submit demonstration units for trial, although one failed to respond so we ended up with three.

“Our 4×2 tractors are plated for operation at 28tonnes gcw but as they’re transporting block polyurethane foam, a light yet bulky material, we don’t get anywhere near that.

“Fully loaded our trailers only weigh about 6.5tonnes.

“They are 16ft high, though, which means the main issue is drag.

“We ran each vehicle for a week at a time and used the same drivers on the same runs, so we could get a genuine mpg reading.

“The New Actros returned the best fuel figure of 10.68mpg, while the latest model from our established supplier came back at under 10.

“We set up a matrix and considered everything from finance rates and driver comfort, to service and parts availability, and even image.

“Mercedes-Benz came out well on top.

“We visited the European Logistics Centre at Mercedes-Benz UK’s headquarters in Milton Keynes, and our Fleet Engineer Chris Colleavy, who played a key role in the decision-making process, has been out to the factory in Germany as well.

“Our drivers have undergone Mercedes-Benz training and love their New Actros, which look great on the road.”