A first-class showing from the CV industry 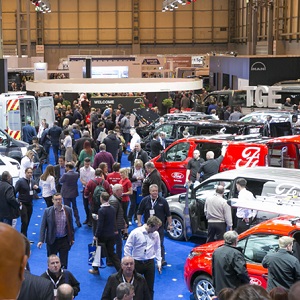 Once again the excellence of the commercial vehicle industry was on display at this year’s CV Show, the largest event of its kind in the UK that provided the perfect platform for a number of important product launches and significant announcements with industry-wide significance.

A host of new vans and pick-ups made their public debut at this year’s show, including the new Ford Fiesta Van, the Mitsubishi Shogun Sport Commercial, the Mitsubishi L200 SVP II and the Isuzu D-MAX Stealth by Arctic Trucks. At the larger end of the scale, the Toyota Hilux, Citroen Dispatch, Peugeot Expert, Renault Trafic Formula Edition, Volkswagen e-Crafter, Ssangyong Musso and LDV V80 Electric all appeared in public for the first time, underlining the importance of the show as a platform for new products.

A surprise debutant at the show was the new Mercedes-Benz Sprinter displayed on the Paneltex stand. The Hull-based converter is using the all-new model to show off its first-ever refrigerated body, with the van wearing a camouflage wrap ahead of its official debut later this year.

CV Show Director, Rob Skelton, said: “With all of these manufacturers using the CV Show as a platform to launch major new light commercials, it proves just how much importance the industry places on the show. It’s a delight and an honour to see these companies using the CV Show to make major new product announcements.”

Ford also used the event to announce the further expansion of its Qualified Vehicle Modifier programme at the show, bringing the total number of approved vehicle converters to 15. Amongst the newly-approved converters are CoolKit, the fridge, freezer and chiller van converters, and Cartwright Conversions, who produce welfare vehicles designed to care of workforces on the move. During the show Hans Schep, General Manager for Commercial Vehicles, Ford of Europe, formally handed over QVM accreditation to Wellhouse Leisure, designed of luxurious campervans based on the Ford Transit Custom.

Andy Barratt, Chairman and MD, Ford of Britain, said, “Businesses rely on the ability and durability of the Transit to earn a living, and as manufacturers of the UK’s best-selling commercial vehicle we are sure that this diverse modification offering, fully approved by Ford, will help to develop and enhance the range even further.”

Amongst other announcements at the show Renault confirmed the introduction of a new sign-writing service. The programme has been developed to reduce vehicle downtime by giving customers three standard templates and allowing the addition of logos, services offered, website address and a business telephone number.

Steve Wilson, LCV Range Manager, Groupe Renault UK said: “This innovative solution embodies Renault Pro+ Commercial Vehicles ambition to provide an ‘EasyLife for Professionals’. Supporting businesses of all sizes to be ready for work is part of our customer commitment. Here our ingenuity and flexibility combine to deliver a unique customer proposition.”

Highways England used the show to launch two new initiatives; a programme to train commercial vehicle drivers in the use of smart motorways and a virtual reality app that drivers can use to give them a greater understanding of blind spots behind the wheel and how to manage them.

John Walford, Commercial Vehicle Incident Prevention Team Leader, discussed blind spot incidents at the show, saying, “They most commonly occur when trucks change lanes or attempt to overtake and using this technology allows us to provide a realistic environment for commercial vehicle drivers so that they can experience the impact of not using their mirrors to check blind spots. It’s just one of the steps we’re taking to help improve safety for this valuable group of drivers and ultimately everyone who uses our network.”

The Cartwright Group had a number of exhibits on their stand, including its new prototype double deck ‘lifting roof’ trailer. It can accommodate 95 cages rather than 75 of other trailers at this height, increasing fuel efficiency and reducing emissions to create a significant improvement in carbon footprint. The lifting roof also means less fuel used as a result of less miles on the road and more pallets being carried.

Cartwright expects to achieve fuel savings of up to about 5% with the new ‘lifting roof’ double deck. Road trials are about to begin and full production is forecast for later in the year. The trailer is expected to appeal particularly to the parcels sector, especially for operators carrying loose load parcels or parcels in cages.

Lionel Curtis, Cartwright’s Technical Director, commented: “This year’s CV Show showcases the most diverse range of products we have ever exhibited at the NEC, together with innovative features across the range. This is what sets us apart from the competition. Every panel is made at the factory from 17mm panels on the 7.2-tonne through profiled GRP panels on the double decks and 55mm insulated panels on the Fridge.”

CV Show Director, Rob Skelton, said, “CV Show 2018 has proved that our industry really is open for business. With crowds of people coming through the doors, it demonstrated that the show really is the go-to event for anyone involved in the transport, logistics and associated industries.”