DS 7 Crossback Driven For The First Time In Public 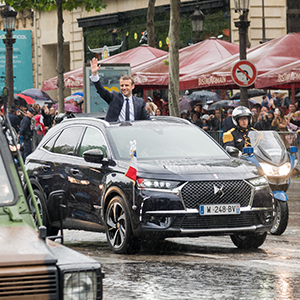 For his first journey as President of the French Republic, Emmanuel Macron chose to ride in the all-new DS 7 CROSSBACK, the very latest model of DS Automobiles that was revealed just two months ago. This ‘Presidential’ DS 7 CROSSBACK has been specially-personalised with an opening roof so the President can greet the French crowd on the Champs-Elysées.

With this historical moment, the DS brand, whose ambition is to embody both French know-how and innovation in the automotive industry, is pursuing the tradition of being the official car manufacturer of the French presidency. DS models are emblematic and have historical provenance, having been used many times on similar symbolic occasions with the 5th Republic.

The ‘Presidential ‘ DS 7 CROSSBACK will be proudly displayed at DS WORLD Paris, located at 33 François 1e street in Paris, soon after its ceremonial duties from Tuesday 16 May for public visitors, and ahead of that day for press/media from Monday, 15 May.

The very first DS 7 CROSSBACK on the public roads: DS engineers and craftsmen worked on this unique Presidential car, 7 months before its public launch (first deliveries start in January 2018).

Distinguished in a sumptuous Ink Blue paint finish, it features a custom- made the opening roof, French Republic signature badging and a Tricolour flag holder.

The ‘Black Art’ Leather interior (named ‘Opera Inspiration’ after a district of Paris) is revised by a French creation (‘Toile de Laque’ is tailored and created by a craftsman recognized for their expertise and know-how in the specialism of decorative gilding: Atelier Maury). 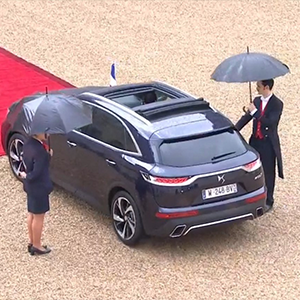 The 20-inch wheels are personalized with finely-created golden attention-to-detail features.

Most of highly-technical features of the DS 7 CROSSBACK feature some of the new items that will become available with this vehicle: DS CONNECTED PILOT, paving the way for autonomous driving, DS ACTIVE SCAN SUSPENSION, the 21st century DS suspension system, which uses a camera to anticipate any bumps and undulations in the road surface to ensure the President and future occupants of this vehicle can enjoy a serene ride experience.