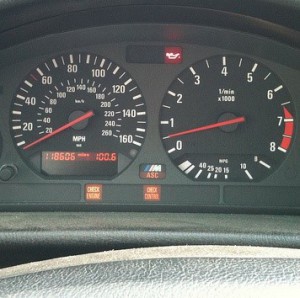 More than one-fifth of motorists ignore ‘red’ dashboard warning lights, continuing to drive rather than stopping as soon as safely possible.

Research by British Car Auctions (BCA), reveals 23% of drivers have failed to heed warnings, while 5.5% claimed they would deal with it when they had time.

More than 50% of respondents, however, said they would stop immediately and call for assistance.

When it comes to amber advisory warnings, 36% of motorists said they had ignored these alerts and did not respond with any urgency.

The survey also revealed it is not just warning lights motorists are ignoring – 35% said if a ‘service due’ message appeared on their dashboard they would not book a service for up to a month.

Overall, motoring costs appear to be a concern for many drivers, with 15% admitting that in the past year they have delayed or deferred necessary repairs.

Believing this could be a false economy, Tim Naylor, Editor of the BCA Used Car Market Report, said: “If a dashboard light comes on, ignoring it now could lead to a substantial repair bill later on that might easily have been avoided.

“In some cases the vehicle may not be safe to drive and at the very least it may mean performance is compromised which is in itself potentially dangerous.”

Image courtesy of drewgstephens, with thanks.