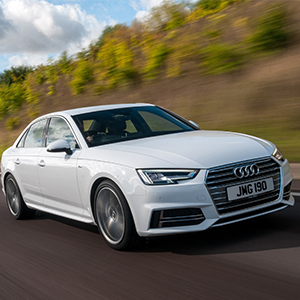 When asked to nominate the car maker that best serves the fleet sector more management-level readers of the UK’s largest fleet-focused magazine ticked the box marked Audi than any other, ensuring that the brand famous for Vorsprung durch Technik is now also notable as Fleet Manufacturer of the Year 2017.

This prestigious award was handed down to Audi at this week’s high profile Awards ceremony in London, where the recently updated A3 was also voted Best Compact Premium Car and for the second successive year the A4 was crowned Best Premium Car.

The Manufacturer of the Year Award is one of only two in the annual hall of fame that are made on the strength of the votes cast by leasing companies, the magazine’s editorial team and fleet managers actively engaging with manufacturers and their products on a regular basis.

It genuinely demonstrates the confidence that key fleet decision makers have in the Audi range and the infrastructure behind it, and rewards the great effort that Head of Audi Fleet Sales James Douglas and his team have invested in building a comprehensive fleet-focused support offer that exceeds customer expectations in much the same way as the cars in their charge.

Of those core fleet-oriented models, two major players – the A3 and the A4 – have also been voted best-of-class in their respective categories in the annual awards. The perennially popular A3, which was further refined during 2016 by a host of revisions and upgrades to styling, infotainment, driver assistance technology and standard equipment, was voted Best Premium Compact Car.

In its awards citation for the car the judging panel writes: ‘Spacious, with a wide range of engine and trim options and best-in-class residuals’, the A3 offers low overheads for fleets and low benefit-in-kind tax for drivers. It does everything well so it’s no surprise that it enjoys such a high level of loyalty among company car drivers.’

For the second year in succession, the A4 also cleaned up with the Best Premium Car award, recognising the major advances in acoustic refinement, dynamics, comfort, efficiency and in-car connectivity that make this car so adept at catering for business users. The judges back up their verdict by describing the car as ‘well equipped with a broad range of efficient yet dynamic engines.’ They also confirm that ‘running costs are very competitive, while build quality and interior quality are class leading’, and assert that ‘the Audi A4 has the greatest driver appeal of any car in this category’.

In his commentary on the awards Editor Stephen Briers acknowledged the efforts made by Audi to not only build and enhance its range but also its relationships with fleet customers, writing: ‘A busy 2016 saw Audi introduce the latest generation A4 and launch a car into a new sector with the Q2, as well as make important updates to the A3 range maintaining its desirability over rivals.

They have ensured the company continues to offer one of the most appealing product line-ups for fleets and their drivers. Audi remains highly competitive on running costs while relationships with fleets have improved with a real focus on customer service at both a corporate and local businesses level.’

Head of Audi Fleet Sales James Douglas emphasised the value of the confidence shown by the readers and the judges in the brand’s products and service: “Product awards made by the particularly discerning fleet sector always have a special significance for us, so we are absolutely delighted that two of our core models have excelled in the eyes of the judges.

“It takes an awful lot to remain competitive in the fiercely fought categories in which the A3 and A4 operate, and I think the fact that the latter has prevailed for a second successive year is a real indicator of the car’s calibre. Models like these and the many other strong business choices in the Audi range deserve to be backed by an exceptional and all-encompassing fleet customer support offer, and I am immensely pleased and proud that the influential readership clearly believes that we deliver that – my team and I will never stop trying to further optimise our service, but this prestigious award indicates that we are making headway and it is a great honour to receive it.”