Oxford City Council has set out plans to go significantly further than the current legal target for air pollution to improve the health of those living, working, and visiting Oxford. 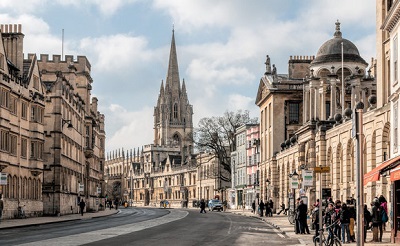 It is believed that Oxford City Council will become the first UK local authority to set out a city-wide air pollution reduction target within its own draft Air Quality Action Plan -the action plan seeks to go further than the legal annual mean limit value for NO2 of 40 µg/m3, with a new local annual mean NO2 target of 30 µg/m3 by 2025.

37 of Britain’s 43 air quality zones are exceeding the legal limits for the main harmful pollutant of concern; NO2. This action plan moves Oxford beyond the focus upon achieving local compliance with air quality targets, by volunteering to set a target that is stricter than the legal target.

The Air Quality Action Plan has been produced as part of the Council’s statutory duty required by the Local Air Quality Management framework.

The Air Quality Action Plan 2021-2025 reflects the Council’s commitment to tackling air pollution through setting a new local target for NO2, going beyond the current target set out by the UK Government.

Under its plan, the Council is proposing to introduce its own local mean annual mean NO2 target of 30 µg/m3 to be achieved, or exceeded across all sites by 2025.

The current legal annual mean limit value for NO2 is 40 µg/m3, however research now shows that this is not a safe limit.

The target of 30 µg/m3 by 2025 is based in evidence, including an analysis of Oxford’s historic air quality monitoring data from 2002 – 2018, air quality modelling projections and studies, and the expected impact of the measures proposed in the draft Air Quality Action Plan.

The new local target mean does not override any legal targets set by central government, rather it sets out a target that the city aims to achieve.

The NO2 target of 30 µg/m3 is both stretching, and realistically achievable by 2025 – however, without the introduction of key schemes such as the Oxford Zero Emission Zone and Connecting Oxford, it is unlikely that Oxford will meet this local target.

The Air Quality Action Plan, and the new local target will be subject to an annual review and each year progress will be reported in the Annual Status Reports (ASRs).

The Air Quality Action Plan 2021-25 also outlines a framework of activity in the city to reduce NO2 emissions, whilst also highlighting new actions to reach and go beyond the council’s new NO2 local target.

The plan sets out 30 actions and measures for the Council to deliver with its partners across four priority areas:

The main priorities for the period 2021-2025 are focused on the delivery of Oxford’s Zero Emission Zone (ZEZ) and Connecting Oxford – two major schemes which have been developed to tackle road traffic emissions and the dominance of the car on our roads.

The Air Quality Action Plan builds upon these proposals and identify new measures to accompany them. Accompanying measures include continuing to work with schools to raise awareness of air pollution and active travel, introducing a Euro VI Low Emission Zone for buses, expanding the City Council’s EV Fleet, delivering the £41m Energy Superhub Oxford, and more.

According to the latest Source Apportionment Study completed by Ricardo Energy and Environment, the transport sector in Oxford continues to be by far the largest contributor (68%) to total NOx emissions in the city.

Currently, diesel cars contributed to 33% of NOx emissions, and buses to 32% emissions. However, after the conversion of all buses to Euro VI through the Low Emission Zone, it is predicted that NOx emissions from buses will decrease, with an estimated 40.6% decrease in bus emissions at St Clement’s – Oxford’s most polluted street.

Many of the measures included within this action plan aim to improve local air quality will also contribute to the Council’s plans to address the climate which was formally recognised in January 2019.

The Air Quality Action Plan 2021-2025 is to be presented to the Council’s Scrutiny committee on 1 September, and will be discussed by the Council’s Cabinet on 9 September. The public consultation on the document will also begin in September.

“Through the City Council’s measures we have helped to reduce the most concerning air pollutant by 26% over the last seven years. We need to go further and faster to clean air and stronger public health—as such Oxford City Council is setting a new Air Quality Action Plan which, for the first time, sets a target for the reduction of air pollution, indeed a significantly stricter target than the Government’s own target. We believe that it is the first time any UK local authority has set a city-wide air pollution reduction target while discharging the statutory duty to create an action plan. By setting a stricter target than the Government’s own target, we believe we are doubling down on our commitment to clean air, public health, and social justice.” Councillor Tom Hayes, Deputy Leader and Cabinet Member for Green Transport and Zero Carbon Oxford