Kia e-Niro charges forward to be named 2019 What Car? Car of the Year 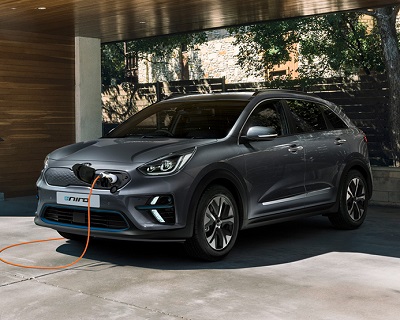 What Car? has named the Kia e-Niro electric vehicle (EV) as its 2019 Car of the Year during its 42nd annual awards ceremony, held in association with Warranty Direct and BNP Paribas Cardif on Tuesday 22 January at Grosvenor House, Park Lane.

The Kia e-Niro beat 23 other category winners to take the overall title, becoming the first electric car to win the prestigious What Car? Car of the Year Award.

Victory for the e-Niro, which has a Real Range of 253 miles, also represents the first time Kia has taken the top prize at the ceremony.

The success for an electric car comes at the beginning of a big year for the EV market, with several major manufacturers, including Audi, Honda and Mercedes-Benz, all planning to launch new electric models in 2019.

What Car? editor Steve Huntingford said: “The demand for electric cars has grown exponentially in recent years, and 2019 is shaping up to be the biggest year yet.

“Most of the leading manufacturers have plans for new EVs, and the fact that the Kia e-Niro was able to beat all its petrol and diesel rivals to win the 2019 What Car? Car of the Year Award shows how far this technology has developed.

“The e-Niro stood out because it addresses the key issues of cost and range that have traditionally prevented many motorists from taking the plunge into EV ownership. Here is a spacious and practical family SUV that demands very few compromises.”

Hyundai joined Kia in being recognised for its work with alternative fuels, being named winner of the Technology Award for its progress with electric and fuel cell technology.

The 2019 What Car? Awards saw the introduction of three new categories, recognising the best models in the Plug-in Hybrid, Sports SUV and Pick-up markets. These awards were won by the Volvo XC90 T8, Cupra Ateca and Volkswagen Amarok respectively.

Last year’s overall winner, the Volvo XC40, returned to be named Family SUV of the Year for a second year running, while the Skoda Octavia continued its run of success in the Family car category, and the Peugeot 5008 reclaimed the crown for the best Large SUV.

Reflecting the diverse range of cars available, the Performance and Sports Car category was split for 2019, broadening the range of eligible vehicles. The new Sports Car Award went to the Alpine A110, while the Alfa Romeo Giulia Quadrifoglio was named Performance Car of the Year.

Kia is the 20th car manufacturer to win an overall What Car? Car of the Year Award since its inception in 1978.

Paul Philpott, president and CEO of Kia Motors UK, said: “Everyone at Kia Motors (UK) Limited and Kia Motors Corporation is honoured and delighted that the e-Niro is the first Korean car to win the What Car? Car of the Year Award.

“This marks an important milestone in the Awards as we approach the tipping point where every motorist will be seriously considering buying an electric car as their next car.

“The market for all kinds of electrified cars is growing dramatically and What Car? recognising the e-Niro shows that the pure EV is now entering the mainstream. The future is definitely electric and with this decision What Car? is pushing even harder on an opening door.”

Aside from its overall Car of the Year success, Kia proved victorious in the City Car category, with the Kia Picanto taking the prize for the second year running.

Warranty Direct was headline sponsor at the Awards for the seventh year in a row, joined by BNP Paribas Cardif.

Simon Ackers, CEO of Warranty Direct, commented: “It is a privilege for Warranty Direct to once again return as headline sponsors. The What Car? Car of the Year Awards are one of the most highly anticipated events in the motoring calendar.

“Each year the experts at What Car? provide a great insight into what motorists can expect to see leading the way in the industry in the coming year and identifying which models drivers should be considering.”

In addition to the winners chosen by the What Car?’s experts, What Car? readers were once again given the chance to have their say on the car they are most looking forward to seeing launched in 2019, with the Honda Urban EV coming out on top.

For more information on the overall 2019 What Car? Car of the Year and the full list of award winners, visit: whatcar.com/awards