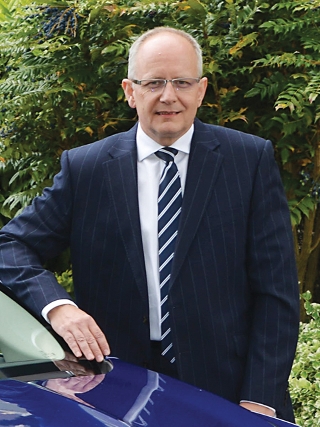 In his new role as Chairman of IAM RoadSmart, the largest independent road safety organisation in the UK, Managing Director of Ford of Britain Andy Barratt has pledged to focus on driver and rider behaviour in the road safety debate.

In his new position, which started on 1 April 2019, he will launch a revamped IAM RoadSmart Manifesto. The Manifesto highlights the seven areas where IAM RoadSmart believe they can make the most impact in reducing the number of people killed and injured on UK roads.

With an emphasis on the potential that improved driver and rider behaviour could have on the safety of our roads, the Manifesto acknowledges the importance of driving to the economy and business. It should be seen as a core skill for business and a health and safety responsibility for all organisations in the public and private sector.

The Manifesto will form the basis of a submission from IAM RoadSmart to the House of Commons Transport Committee Inquiry into Road Safety.

Andy has taken on the prestigious role of IAM RoadSmart Chairman from Ken Kier OBE, who steps down this month having been in the role for three years.

Andy has almost four decades of experience at the Ford Motor Company where he started as an apprentice. Since 2015 he has been Managing Director of Ford of Britain.

Speaking of his appointment, Andy said: “To be appointed chairman of IAM RoadSmart is an honour. I wholeheartedly support IAM RoadSmart’s Manifesto pledge that post-test training is vital for safer roads. I’m delighted to be taking a leading role for a charity whose principal purpose is to make better drivers and riders.

“In my roles at Ford, developing safe vehicles is the number one priority. In taking the Chair of IAM RoadSmart, my focus will be to ensure that human factors are high on the road safety agenda in order to reduce the number of people killed and seriously injured on roads in the UK.

“As a cyclist, driver and pedestrian I’ve been pleased to lead Ford’s ‘Share the Road’ initiatives, encouraging cooperation and understanding between road users. As a motor industry representative chairing IAM RoadSmart, I believe that we can continue to find common ground, cooperation and practical ways forward to make sure that real change happens – with vehicle makers, politicians, the media, and with all road users.”

IAM RoadSmart’s Manifesto focuses on the importance of boosting the confidence of drivers and making it an enjoyable activity, while keeping everyone safe at the same time.

Embracing all stages of a driving and riding career from immediate post-test into older age, the Manifesto underlines the importance of periodic refresher courses. It also includes extending driver rehabilitation after a conviction for a wider variety of motoring convictions.

It also highlights the changing world of new technology as the switch to autonomous and connected vehicles continues to gather pace.

Mike Quinton, IAM RoadSmart Chief Executive Officer, said: “I am delighted that we have attracted someone of the calibre, standing and seniority in the UK automotive industry as Andy to the role of Chairman.

“I am confident his knowledge and contacts will be invaluable in driving us forward and I look forward to drawing on his skills and leadership experience.”