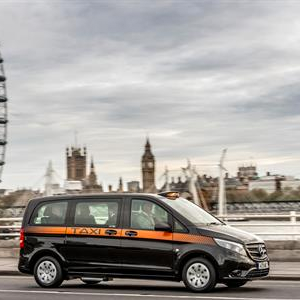 The Mercedes-Benz Vito Taxi is outselling all other models to take a comfortable 55.1% market share in London, with 489 Vito Taxis licenced January to August 2017, compared to 399 TX4 during the same period according to Transport for London figures.

Offering unrivalled levels of space and refined comfort for the driver and up to six passengers, as well as being fully-wheelchair accessible, the new Mercedes-Benz Vito Taxi sets the benchmark for London’s black cabs.

As part of a specification development, for registrations from 1 July 2017* onwards, Vito Taxi models also come with a spare wheel carrier as standard.

Steve Bridge, Managing Director, Mercedes-Benz Vans UK Ltd, commented: “We know that for both cabbies and their customers, Vito Taxi provides the most comfortable, efficient journey, and the results for 2017 so far speak for themselves – we are outselling the competition.

“What this does mean though, as that there are very limited numbers left for 2017 so if any of the taxi fraternity wanted to experience a new Vito Taxi, time is running out.”

The new Vito Taxi London is available from £170 per week with no deposit for vehicles purchased before 1 October 2017** and is supplied exclusively via Mercedes-Benz Dealer S & B Commercials at Welham Green, Hertfordshire.