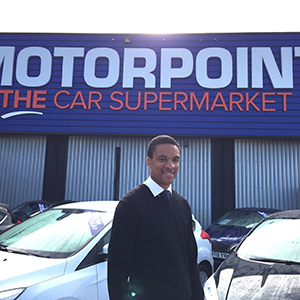 Motorpoint’s Simeon Powell is the star of a new regional apprenticeship promotional campaign.

The 23 year-old, who has worked as an Accounts Assistant at the headquarters of the UK’s leading car supermarket since April 2014, was chosen by the Cabinet Office to share his experiences as an apprentice on YouTube.

Simeon has undertaken a variety of roles at Motorpoint since completing his apprenticeship with a private accountancy practice and jumped at the opportunity to feature in a video produced by the Cabinet Office aimed at encouraging more young people in the Midlands to follow his example and benefit from a high-quality apprenticeship.

“I’m a big advocate of apprenticeships,” explained Simeon, who in his spare time works as an Ambassador for the National Apprenticeship Programme. “My apprenticeship gave me an opportunity to learn as I worked and demonstrate to Motorpoint my capabilities without necessarily having the formal qualifications.

“Motorpoint have been extremely supportive since I joined them last year giving me the opportunity to increase my skills and knowledge in my current role as well as the possibility at some point for personal development through its ground breaking Talent Management programme.”

Satvir Atwal, General Manager of Motorpoint Derby, added: “Simeon has been a real asset to Motorpoint since joining last year and the perfect role model for anyone considering doing an apprenticeship either now or in the future.”

Volvo Trucks continues to lead the deployment of zero-tailpipe