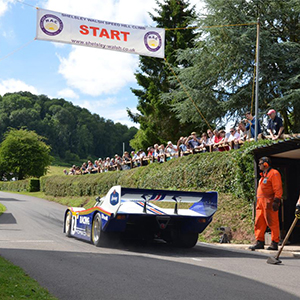 “A simply fantastic event”, that was the verdict of motoring legend and five-times Le Mans winner Derek Bell after appearing at Classic Nostalgia, a period themed motoring extravaganza, staged at Shelsley Walsh Hill Climb, near Worcester, over the weekend.

It is believed record spectator numbers, in their thousands and not seen since the Midland Automobile Club’s Centenary in 2001, visited the historic venue over both days. They were treated to a carnival atmosphere of sights, smells and sounds from over the years where decades of extremely exciting racing cars in action were accompanied by live music, dancing and period dress.

Derek Bell, said: “I am like a kid in a candy store here today, being allowed to drive a selection of cars from over my career, with their current owners taking such a pride and pleasure in seeing their iconic cars in action.

“Everyone has their own favourite but to drive the classic Porsche 956 up this historic – and very narrow! – track is a pure joy and the appreciation shown by such a huge number of spectators is just brilliant.

“This really has been a fantastic event and of course, in such a beautiful setting, and I have had a truly wonderful time here today.”

Derek took to the hill on several occasions during Sunday with the Jaguar XJ12C from 1976, the famous Porsche 956 that he shared with Stefan Bellof and then one lucky prize winner from his old college in Worcester got a spirited drive up the hill in the Bentley Continental GT.

Another famous motoring gentleman in attendance was veteran Jaguar test and development driver Norman Dewis, from Coventry, who will be celebrating his 95th birthday next month, and drove an E-Type Jaguar up the course, before carrying out interviews and signing autographs for queues of enthusiastic fans.

Besides the informal and very family-orientated social side to proceedings, many closely- fought battles took place on the track itself, with local man Keith Harris taking Best Time of Day on both days in his 1973 Chevron racing car.

Keith commented: “This is my ‘home hill’ and what with the fantastic weather, relaxed atmosphere and camaraderie amongst fellow competitors, it really doesn’t get much better than this.

“I had problems selecting gears on a couple of runs but managed to ‘cobble’ the gearbox back together and then post a time of 29.07 to take the top slot.”

Teme Valley driver and regular MAC competitor Malcolm Thorne brought along his latest acquisition, a 1962 Lotus 24 BRM, making its debut at Shelsley Walsh and declaring the car to be simply incredible to drive!

Other successful drivers included Worcester competitor Paul Jones, driving his Britax Mini Cooper, taking a class win and being absolute thrilled to be congratulated by Derek Bell himself in the paddock after his run, with motivational advice to ‘just keep pushing’. Paul added: “What a charming man, he is so friendly and spoke to everyone, also coming across very well in his fascinating interview with Toby Moody, where he spoke of his work with Steve McQueen in the feature film Le Mans.”

Saturday saw a full entry with class wins for Stephen Luscombe in an MG Midget and Andrew Walker in an MGB in the Luffield Cars MGCC Speed Championship. Bill Tuer took the honours in his 1932 Morgan Racing in the Morgan Three Wheeler competition.

The Bert Hadley Memorial Championship saw wins for Bernard Cowley in his 1930 Austin Seven in the road class and Terry Griffin with his 1931 Austin Seven Race Special in the track category.

Further class wins were achieved by well known event sponsor Paul Matty in his Lotus 35, Jonathan Williamson in his Porsche 911 Carrera, Garry Cox in a Reliant Scimitar Coupe, Richard Mason in an Austin Healey 3000, Finlay Mackintosh in a Cooper Mk 6 and Edward Tack in an Argo JM8, amongst others.

Drinkwater in an MGA Coupe, Tom Cowley in a 1952 Cooper, Miuke Gallery in a 1965 Mini Cooper S, Nick Stephens in a Lotus 51B, Kim Johnson in a Mallock and Richard Mason in an Austin Healey 3000.

Summing up, Tony Harrison of the MAC Sports and Classic Section said: “What a successful event, it is just wonderful to see so many people here and to witness the superb collection of cars in action. Derek Bell and the Le Mans cars have added a little extra spice and excitement to the proceedings and it has taken quite a few of us back to the heady days of the 50s and 60s, brilliant!”

The car park was full of classic car clubs and classic car owners all out enjoying the sun and having picnics. Some even took up the invitation to take part in the Classic and Sports Cars Concours which was won by Chris Sherwood from Hereford with his Lancia Aurelia Cabriolet. The car was the 1951 Geneva Motor Show car built by Pinifarina and displayed on their stand at the 1951 show.

James Page, Editor of Classic and Sports Car said “There was another fantastic entry of 100 cars which filled up very quickly and with lots of variety from pre war cars to recent supercars. The Lancia that won really stood out and was an absolute star.”

Simon Taylor, Classic and Sports Cars editor-at-large said that “I remember the entries from the earlier years being only a handful and in the last few years without doubt the Concours D’elegance has grown into a really quality entry.”

The Courtyard had a full day of entertainment with music from the 50s and 60s, dancing girls and even dance lessons which proved very popular with the visitors.

At lunchtime on the Sunday everyone was treated to a wonderful interview with Derek Bell, conducted by motorsport commentator Toby Moody, talking about Le Mans and how Derek made his way up through motorsport and his involvement with Steve McQueen and the making of the film Le Mans. There were also book signing sessions throughout the day giving the spectators the chance to meet Derek and get his autograph.

Shelsley Walsh Hill Climb was also presented with a “Red Wheel” plaque for its contribution to motoring and motorsport by The Transport Trust, with many of the motoring pioneers having used Shelsley Walsh over the years to try out their new inventions. Derek Bell unveiled the plaque with Julian Ghosh of the Transport Trust, Sir Anthony Winnington (High Sheriff of Worcestershire), John Moody (President of The Midland Automobile Club) and Norman Dewis (Jaguars legendary test driver).

Jaguar’s numerous anniversaries were celebrated with a stunning display of cars including three E-types, the Italian Job, Geneva Motor Show car, and Denis Jenkinsons. The last Ecurie Ecosse C-type and an an XKSS round off the display cars. Those demonstrating on the hill were the Broadspeed XJ12C and Group 44 along with a last minute surprise Project 7 in the hands of Jaguars test driver and Ian Callum’s Mk2.

Looking to the skies, there were also air displays from Rich Goodwin in his Pitts Special doing the most amazing acrobatics and the whole weekend was rounded off by several flypasts of a Spitfire from the Battle Of Britain Memorial Flight to mark the 75th anniversary of the Battle of Britain.

Mark Constanduros, Commercial Manager for the Midland Automobile Club said “What an amazing couple of days! We had the largest crowds since the centenary in 2001 and had to use the overflow car parks.”

“The car parks were full of classic cars, with many clubs making the event their club day out and putting on a tremendous display for as far as the eye could see.”

“Having Derek Bell and Norman Dewis with us marking various anniversaries was fantastic and to see the crowds listen to them and get the chance to have a chat and get autographs was really wonderful.”

“It has been a great event and one we hope to build upon over the coming years.”

Next event is Championship Challenge on the 15th and 16th August with the Avon Tyres / TTC Group British Hill Climb Championship.

Details via the web site www.shelsley-walsh.co.uk