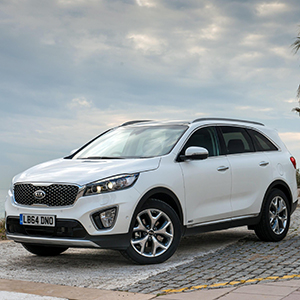 Since the 1 April 2015, when the long awaited all-new Kia Sorento went on sale, it has seen unprecedented demand with a total of 1,280 sales in the first three months. Kia’s forecast was set well under 1,000 sales at the beginning of the year based on consumer intelligence and past sales data.

More pleasing to see is the number of top spec, £41,500 KX-4 models being snapped up by eager customers seeking a highly specified, stylish and practical seven seat SUV with a competitive price tag. In April KX-4 Sorentos accounted for 40% of the models sales, this conjoined with KX-3 sales, the second highest model in the range, and the sales percentage rose to 61%. For the first three months of Sorento sales, KX-4 Sorento sales have been 10 times more on average than the entry level KX-1 model.

The substantial demand for Kia’s range topping model in the UK has seen a surge in the supply requirements from dealers. Paul Philpott, President & CEO Kia Motors UK Ltd commented: “The all-new Sorento has been a huge success in the past three months and we have high hopes for it in the coming months and year.

“The Sorento defines the brand offering of Kia today and the sales figures are proving this is what our new and existing customers want – stylish, practical, dynamic and desirable vehicles. The recent success of the all-new Sorento has seen dealer demand surpass our expectations, which is a nice problem to have but it means waiting times for KX-4 Sorento customers is longer than originally expected,” he added.

The all-new Kia Sorento comes from a long line of successful and world renowned Kia SUVs, including the Sportage, Mohave and Rockstar. July 2015 sees Kia’s cumulative global SUV sales exceed the 10 million mark, which is a staggering 30% of its total cumulative sales of 31.7 million cars, including impressive sellers such as the Picanto, cee’d and Rio.

In 2015, SUV sales are increasing which thanks to the ever popular product offering from Kia, including the all-new Sorento. Already this year Kia has sold more than 490,000 SUVs around the world, which accounts for 39% of total sales.

SUVs are an intrinsic part of Kia’s heritage and forward looking brand offering, Sportage and Sorento are household names in the UK and continue to deliver above customer expectation.