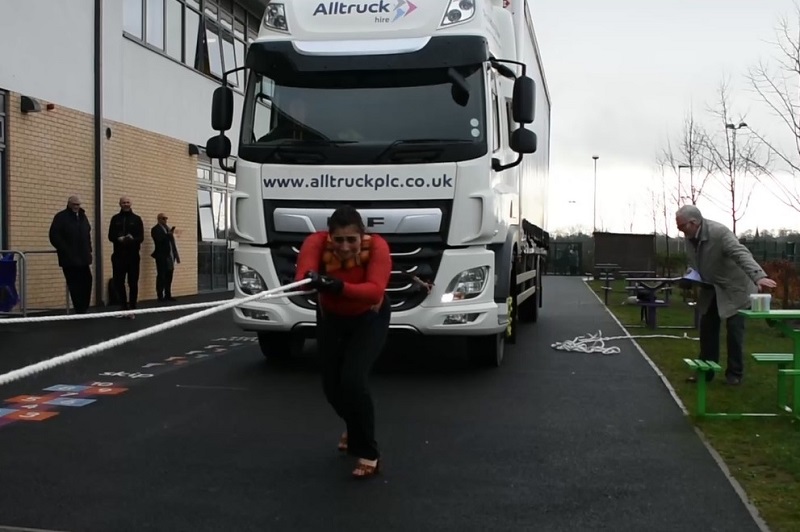 Alltruck, which has its head office in Croft, is a specialist in Contract Hire, Truck Rental, Fleet Management and Workshop Service and Maintenance, provided the DAF CF 250 truck, which was filled with cargo to bring it up to a weight of 11,380 kg – the equivalent of 6 family cars – making it the heaviest vehicle dragged by a woman wearing high heels in the world.

Asha should be entered into the Guinness Book of Records after her attempt has been adjudicated, which can take up to 12 weeks.

The previous record for heaviest vehicle pulled in high heels was set at 6,586kg by Lia Grimanis in 2014, meaning Asha broke the record by nearly five tonnes.

The truck pull attempt was organised as part of a wider celebration held at Ellesmere College, Leicester, to mark 10 years since the national Special Olympics was held in the city, as well as highlight the success of former student, Julie Freestone, who will represent GB in the Special Olympics in Abu Dhabi in March 2019.

Commenting on the event, Kieran Matthews, member of Alltruck’s marketing team said: “At Alltruck we like to give something back to the local community that we serve. So, when we heard about Asha wanting to break the record for heaviest truck pulled by a woman, we couldn’t volunteer one of our trucks fast enough.

“Alltruck would like to say congratulations to Asha on her impressive achievement. We are glad that one of our trucks could be used for something a bit different!

“It was also a great privilege to be involved in an event raising awareness of the Special Olympics and celebrating the success of Leicester’s Julie Freestone.”

Following Asha’s performance, pupils at Ellesmere College were invited to look around the Alltruck livered truck.

Kieran added: “Whilst watching Asha breaking the world record was a fantastic experience, my favourite part of the day was seeing the smiles on the pupil’s faces as they got to explore the truck and pretend to be truck drivers.”

Steph Beale, Principal at Ellesmere College, which teaches over 270 students with a range of educational difficulties, said: “At the school we provide a truly inspirational learning environment that allows every pupil to achieve their best.

“We are therefore delighted that Asha chose to attempt this world record in front of our pupils and staff. We hope that it showed our pupils that dedication, devotion and determination, along with a strong belief in your own abilities leads to success.”

A short video clip of the world record attempt