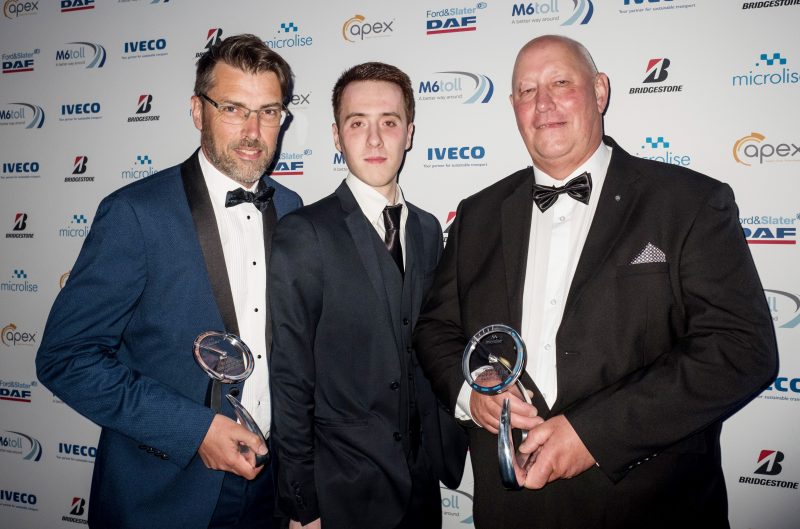 Two HGV drivers from Bibby Distribution have triumphed at Microlise’s Driver of the Year Awards, in recognition of their excellent performance behind the wheel.

Mark Field, from the 3PL’s Milton Keynes depot, was named overall Driver of the Year, while John Males was presented with a Lifetime Achievement award, after being nominated by Bibby Distribution for his work on the DS Smith contract in Blunham.

Dale Coppin and Philip Starkie, who work at Bibby Distribution’s Harlow and Blunham depots respectively, were also nominated by the company and shortlisted in the HGV Hero award category, with Dale being named runner-up.

Mark, who has been driving for Bibby Distribution for more than 12 years, was one of more than 210,000 drivers automatically entered for this year’s awards using telematics data collected over a 12-month period. Those drivers to make the shortlist stood out for not recording a single instance of harsh braking, over-revving or excessive acceleration – with Microlise analysing data from more than 26 million journeys carried out using its telematics systems during 2018, covering billions of miles.

Mark’s skills also saw him win the ‘Short Distance’ category – for drivers travelling less than 30,000 miles per year due to the local, multi-drop nature of their routes. Both he and John collected their awards at an evening ceremony held at Coventry’s Ricoh Arena on May 14th, before Mark was presented with the overall Driver of the Year accolade at the Microlise Transport Conference the next day.

Receiving the award before an audience of 1,200 senior transport industry professionals, Mark said: “It really is fantastic to be recognised, particularly out of such a huge pool of drivers. I’ve always enjoyed being behind the wheel and I just like to do the best I can. Winning these two awards is a very special moment!”

David Haworth, Bibby Distribution’s HR Director, commented: “These awards celebrate the very best in the industry, so for Mark and John to be recognised by Microlise in this way is an incredible achievement for both them and the business.

“This reinforces Bibby Distribution’s commitment to investing in our people, so we can help every driver reach their full potential. We’re delighted both Mark and John’s hard work has paid off.”

Bibby Distribution uses telematics from Microlise across its entire fleet of 650 tractor units and rigid trucks, with the information being carefully analysed to create bespoke driver training programmes which aim to further reduce CO2 emissions and fuel consumption.

The initiative has seen Bibby Distribution drivers increase their average fuel efficiency, which led the company to win an Ecodriving Hero award from the Energy Saving Trust, in partnership with the Department of Transport, in November 2018.

The use of telematics supports the company’s long-term ‘Road to Zero’ strategy, aimed at eliminating harm, waste and environmental impact from its operations.

Now in its fifth year, the Microlise Driver of the Year Awards recognise truck drivers for outstanding performance and contributions to the transport industry. The event is held the day before the Microlise Transport Conference – which has grown quickly to become Europe’s largest road transport conference.

awards, Bibby Distribution, Driver of the Year
Pin It
Tweet