At 19:45 on Saturday 24th July Bolton Mountain Rescue Team were requested to assist with the report of a vehicle “stuck in a marsh” whilst off-roading. The location was quickly determined to be on the slopes of Noon Hill, Rivington Moor. 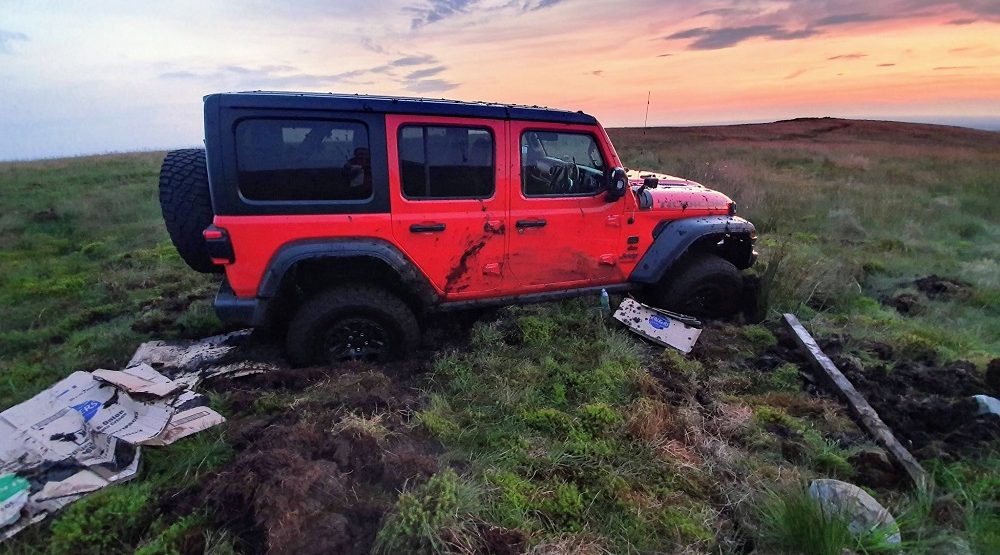 Bolton MRT do not provide an off-road vehicle recovery service – its primary role is to assist people who are injured or endangered. However, due to the onset of darkness and the location of the vehicle on protected SSSI land with some risk of wildfire, one team member was sent to investigate.

On arrival a Jeep Wrangler Rubicon vehicle was found to be stuck in a peat bog, carrying 5 occupants who were neither equipped nor experienced for driving on the terrain. One of the occupants was unable to walk owing to a pre-existing injury.

It was decided to mobilise additional team members and vehicles in case a stretcher evacuation became necessary.

The occupants had already called for help from a friend. The team urged that no further vehicles should be driven on to the moor but this advice was not heeded.

All involved walked off the moor and were conveyed by the team to Horwich for collection by friends. The two vehicles were left in situ overnight.

Bolton MRT’s Team Leader Steve Fletcher said, “Off-road driving requires training, good judgement and experience. Vehicles and participants should be properly equipped for the conditions and contain the tools and capability to self-recover if necessary.

“Off-roading is an enjoyable hobby practiced by thousands of responsible drivers who use green lanes or other land where off-road driving is permitted, such as dedicated off-roading centres.

“Driving a vehicle onto a site of special scientific interest (SSSI) without the permission of the landowner and Natural England is forbidden. Driving onto a peat bog causes immense environmental damage and is dangerous. This was an incident that should never have happened. I am relieved that the outcome was not more serious.”

The following morning the team was requested by United Utilities to recover both vehicles, in the hope of preventing further environmental damage that might otherwise occur to the moor by self-recovery efforts. Both vehicles were recovered to the nearest road.

Officers from Lancashire Constabulary Rural Taskforce were called to attend this incident and spoke to the occupants of the vehicles at length. We understand that a police investigation is ongoing in conjunction with partners United Utilities and Natural England.