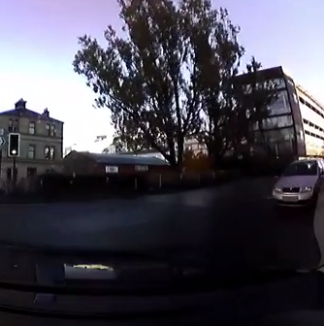 Dash-cam footage has emerged of the moment a careless driver jumped a red light in Glasgow, causing a £5,000 collision.

In the video, a silver Skoda Octavia smashes straight into a £30,000 Volkswagen Tiguan at between 20mph-25mph, shunting it 90-degrees to the side.

The owner of the Tiguan, John Brown, 57, had a SmartWitness accident camera fitted to the vehicle, ensuring the entire collision – which occurred last November – was caught on camera.

Police called to the scene requested a copy of the recording as evidence, with investigators finding it proved the Skoda driver’s careless driving.

The Skoda driver, a fully-insured Russian national, was subsequently prosecuted for driving without due care and attention.

Mr Brown said: “Obviously I knew that I had done nothing wrong but it was good to view the footage later and see that I had been driving responsibly, within the speed limit and could be seen clearly going through a green light.”

The wheel arch, sill and a rear door of the Tiguan were badly damaged and one of the tyres needed to be replaced.

There was further damage to the rear suspension and tracking, with the car forced off the road for four weeks.

“Thankfully the other driver was co-operative and admitted at the scene that he had been at fault,” added Mr Brown.

“A taxi driver following the Skoda saw what had happened and agreed to be a witness.

“Nevertheless, the police were called and when I told them I had a SmartWitness camera they immediately requested a copy of the footage so that it could be added as evidence to the charges they would be bringing against the other driver.

“A few days later, when they reviewed the footage they said it was clearly proof of careless driving.”

Simon Marsh, Managing Director of SmartWitness, added: “We were lucky in this case because the driver at fault was fully insured and immediately admitted liability.

“But that doesn’t happen very often.

“Motorists will often try to blame the other driver even when they are at fault, and if there are no witness to the accident you never end up with a satisfactory solution.

“It’s why more motorists are investing in vehicle cameras – it removes all the worry and doubt in the event of an accident.”