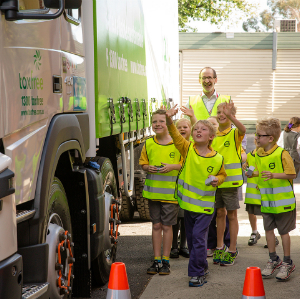 Stop, Look, Wave’, Volvo Trucks’ traffic safety course for children, has been a major international success. Since the programme was launched globally a year ago about 100,000 children have learned how to interact safely with commercial vehicles in traffic. Now, just in time for the anniversary of the launch, Volvo Trucks is releasing a new film on YouTube to spread the message even further afield.

“With ‘Stop, Look, Wave’ we’re giving children the world over the opportunity to better understand how trucks operate in traffic. In an easy to understand way, we aim to make them aware of the risks and how best to avoid them,” says Carl Johan Almqvist, Traffic & Product Safety Director at Volvo Trucks.

Important to see and be seen

In most traffic accidents, the human factor plays a decisive role. For instance, it can sometimes be difficult for a driver to detect pedestrians and cyclists who are close to the truck. The training programme therefore focuses on how important it is for children to be attentive and to make eye contact with the truck driver, either directly or via the rear-view mirrors. Amongst all else, the children learn to stop, look carefully around them, and make the driver clearly aware of their presence by waving at him or her before crossing the street or road.

“We work continuously to reduce accident risks by equipping our trucks with intelligent safety systems and by training drivers in safe driving techniques, but a safe traffic environment is based on the smooth and dependable interaction of all road users. That’s why it is so important to lay the foundations for safe behaviour at an early age,” explains Carl Johan Almqvist.

100,000 children have taken the course in one year

Volvo Trucks has conducted similar campaigns nationally or regionally for many years. But ‘Stop, Look, Wave’ – launched globally in 2015 – has achieved far more widespread coverage. To date about 100,000 children in 13 countries all across the world have done the course. Finland, Brazil, South Africa and South Korea are some examples and ‘Stop, Look, Wave’ was recently launched in Australia to considerable media attention. Now, this autumn, the programme will be rolled out in the USA and Spain, among other countries.

Much of the spread of this programme takes place via the Volvo Group’s own employees and networks around the world, as well as by customers and partners. The programme is also supported by the International Road Transport Organisation. The material, which is freely available on the Volvo Group website, can be found in 10 languages and can be used by schools, haulage companies, traffic-safety organisations and many others.

“The programme is easy to tailor to local conditions and integrate into the school’s education system. Above all it has an important universal message that is easy for children to understand and absorb,” says Carl Johan Almqvist.

Almost exactly one year after the original launch a new film is being released, with animated truck driver Tim in the lead role.

“We naturally want as many people as possible to internalise ‘Stop, Look, Wave’ and that is why we’re bringing the message alive with an animated film and distributing it via a wide range of channels such as YouTube.” explains Carl Johan Almqvist.

Check out the YouTube video featuring Tim the Driver :