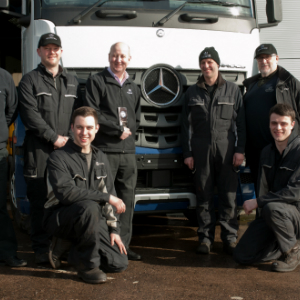 Staff from Dealer Mercedes-Benz Truck & Van (NI) have won national recognition from the manufacturer, for their determination to go the extra mile to keep their customers vehicles on the road.

The Mercedes-Benz Truck & Van (NI) team of Ian Burrows, Caolan Doyle, Gordon Stewart, Kenny Anderson, Mark Elliott, Paul Donaldson, Paul Rooney and Robert Milligan were nominated after pulling out all the stops to help a German driver who turned up at their Dungannon depot with damaged air suspension to his Actros tractor unit, and just four hours to spare before his ferry to the Continent was due to depart.

Despite the language barrier – the driver spoke no English – the team swung straight into action, and parts were promptly ordered from the Dealer’s headquarters in Newtownabbey, 45 miles away, arriving within the hour. A new airbag was fitted and the damaged pipework repaired, and with a handshake and a “Danke!” the grateful driver was on his way in plenty of time to make his sailing.

Now the team are looking forward to taking their One Team winner’s prize… a day of high-octane action at the Mercedes-Benz World complex in Brooklands, Surrey, which will include AMG track driving and 4×4 experiences, as well as a thrilling ‘Silver Arrows’ passenger ride.

The award was presented by Sam Whittaker, Director, Customer Services & Operations for Mercedes-Benz Trucks, who declared: “This team really pulled together across depots and helped a customer they’d never seen before.

“They gave equal care to him and ensured he was back on a ferry to Germany in time to make his delivery. These guys are the epitome of what One Team is all about – putting the customer first and taking their problems away. Well done to everyone involved!”

Recently appointed Dungannon Depot Manager Mark Elliott said: “I’ve inherited an excellent team, with a great blend of youth and experience – and this was a perfect example of their dedication to the cause of keeping our customers moving.

“We fully understand that a vehicle off the road can mean both a headache and a financial cost to the operator so we’re always committed to getting vehicles fixed, and back on the road earning money, as quickly as possible. It’s certainly very gratifying to have our efforts recognised and we’re all delighted to win this award.”

Congratulations guys, this is the team you want on your side.