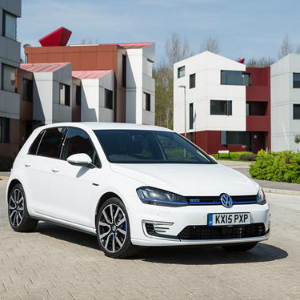 Volkswagen has achieved outright victory in the prestigious Green Apple Awards for one of its most highly praised new models – the Volkswagen Golf GTE.

The Green Apple automotive awards – now in their fifth year – are bestowed by The Green Organisation, a not-for-profit group which invites entries from across the industry. As has become the custom, the awards were this year once again presented at the Houses of Parliament in London.

The innovative Volkswagen Golf GTE triumphed in its class – ‘electric hybrids or pure electric vehicles’ – as well as taking the overall title of Green Apple Champion 2015 in the influential awards, voted for by automotive experts from the Midland Group of Motoring Writers.

The Golf GTE is powered by a combination of petrol engine and electric motor. Capable of returning up to 166 mpg, and with CO2 emissions measured at just 39 g/km, the innovative plug-in hybrid model has already scooped a series of prominent automotive industry awards including the Green category in the annualBusinessCar Fleet Technology Awards.

Priced from £33,755 (OTR RRP), excluding Government Plug-In Car Grant, it offers up to 204 PS for genuinely spirited performance, merging GTI dynamics with e-Golf electric credentials. At the touch of the ‘GTE’ button, the electric motor and 1.4-litre TSI petrol engine combine to deliver a
0-62 mph time of 7.6 seconds and a top speed of 138mph, where the law permits. Maximum torque of 350 Nm is available from just 1,600 rpm and, when fully charged in all-electric mode, the Golf GTE has an electric range of up to 31 miles**. When electric and petrol combine, the total range is 580 miles**.

One Midland Group judge said of the winning Golf GTE: “It’s engineered like a Volkswagen, feeling solid and safe, while the hybrid system returns some superb figures when driven like a hybrid should be. For those days where there’s an empty country road it turns into a proper GTI, handling the extra weight with aplomb and proving you don’t need to make many compromises to produce a viable green choice.”

Welcoming the success of the Golf GTE in the 2015 Green Apple Awards Alex Smith, Director of Volkswagen UK, said: “The Golf GTE is a clear winner, with an unbeatable mix of spirited GTI-style performance and exceptional economy. The car showcases Volkswagen’s progress in the area of plug-in hybrid technology and stands as a real testament to the engineering strength and driving appeal of our cars.”