‘Unwelcome and unnecessary’: RHA launch campaign against A14 toll plan 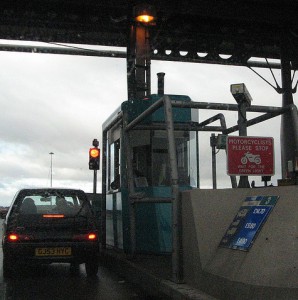 The Road Haulage Association (RHA) are launching a sticker campaign against government plans to toll a section of the new A14.

Two sticker shapes – one long horizontal, the other portrait – are being produced by the Association to accommodate all commercial vehicles and trailers.

The Huntingdon southern bypass tolling proposals have already drawn strong criticism from hauliers in the region.

Last week, the RHA said that it amounted to an attack on the East Anglian economy.

The Association claimed that, if implemented, the scheme would:

Director of Policy at the RHA, said: “The proposal is, in effect, to create something with much the same effect as the Dartford, Severn or Humber crossings.

“When David Cameron told the House of Commons that he wanted to see the Department for Transport building roads, he surely did not mean destroying perfectly sound road infrastructure in the process.

“The tolling proposal stands on its head the logic of the Chancellor’s recent reduction in tolls at the Humber Bridge in order to boost business.

“Here we have no major bridge to build, just the imposition of a toll that will damage the economy locally and in the region as a whole.

“The Department for Transport’s basic commitment to making much-needed and overdue improvements to the A14 route is welcome.

“But hauliers view the charging plan as both unwelcome and unnecessary.

“It sets a worrying precedent for the future, which could see the evolution of a patchwork of tolls.”

Image courtesy of dogfael, with thanks.