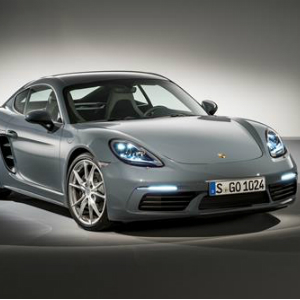 Today, Porsche proudly unveils the new 718 Cayman. The latest and fourth generation of the mid-engined, two-seater sports coupé is distinguished by a distinctive athletic and purposeful appearance, with new flat-four turbocharged ‘boxer’ engines delivering upwards of 300 hp beating at its heart.

Since its debut in 2005, the Porsche Cayman has earned a particular reputation as a driver’s car among owners and fans alike. Now, the new 718 Cayman aims to once more set the class benchmark for driving performance.

Like the 718 Boxster, the new 718 Cayman models continue the tradition of the Porsche 718 mid-engined sports cars that won numerous races in the 1950s and 1960s, powered by four-cylinder ‘boxer’ engines.

New four-cylinder turbocharged engines
The same new four-cylinder ‘boxer’ engines with turbocharging that first debuted in the 718 Boxster are shared with the 718 Cayman. As a result, coupé and roadster Porsche models offer identical engine outputs for the first time. The 718 Cayman derivative is powered by a 300 hp (220 kW) 2.0-litre engine. The 718 Cayman S features a 350 hp (257 kW) 2.5-litre engine. This represents 25 hp more power compared to the prior models, with NEDC fuel economy also increasing to 34.9 – 40.9 mpg Combined.

The tremendous thrust from the new engines promises rewarding levels of responsiveness even at low revs. The 2.0-litre engine of the 718 Cayman produces up to 380 Nm (plus 90 Nm) of torque, generated between 1,950 – 4,500 rpm. The 2.5-litre engine of the 718 Cayman S features a turbocharger with variable turbine geometry (VTG). This technology has been hitherto used exclusively in the 911 Turbo, and is unique to Porsche in petrol engine applications.

New chassis tuning for greater precision and more cornering stability
In terms of driving dynamics, the new 718 Cayman follows in the spirit of the classic 718 cars. Thanks to their outstanding agility, the historic mid-engine sports racers won numerous races in the 1950s and 1960s such as the Targa Florio and Le Mans.

The comprehensively retuned chassis of the 718 Cayman has increased dynamic responsiveness and cornering grip; springs and anti-roll bars have been designed to be firmer and the tuning of the shock absorbers has been revised. The steering, which has been configured to be ten per cent more direct, enhances agility and consequently increases driving pleasure further still. The rear wheels, which are half an inch wider, in combination with the re-developed tyres result in an increased lateral force potential and hence greater cornering grip.

Driving dynamics options such as the Sport Chrono Package and the Porsche Torque Vectoring (PTV) electronically-controlled rear limited slip differential allow the sporting character of the 718 Cayman to be further custom-tailored to suit individual preferences. Another available option is Porsche Active Suspension Management (PASM) with -10 mm lower ride height. Additionally, in the S model, PASM sport suspension combined with a – 20 mm lower ride height is offered for the first time.

The Sport Chrono Package can be adjusted via the mode switch on the steering wheel. Supplementing the previous settings of ‘Normal’, ‘Sport’ and ‘Sport Plus’ is the ‘Individual’ programme, which is able to call up previously programmed individual settings for various systems.

On account of the new car’s greater driving performance capabilities, stronger brake systems are now in use with 330 mm brake discs in front and 299 mm discs at the rear. The 718 Cayman features the brake system that was previously used in the Cayman S. The 718 Cayman S in turn uses the four-piston callipers of the 911 Carrera, combined with 6 mm thicker brake discs.

Redesigned interior and PCM as standard
Behind the wheel, subtle revisions are apparent in both the 718 Cayman and the 718 Boxster. The upper part of the dash panel including air vents is new. The new sports steering wheel in ‘918 Spyder’ design as well as the extensive connectivity options have now been added to the 718 cockpit, along with the Porsche Communication Management (PCM) as a standard feature. Mobile phone preparation, audio interfaces and the 150-watt Sound Package Plus are all part of this standard.

Options are available to extend the PCM. The Connect module, for example, includes special extensions for smartphones, such as the USB port, Apple CarPlay and Porsche Car Connect. Another option is the satellite navigation module with voice control, which makes it easy to input driving destinations. If the Connect Plus module is selected, this can be extended with real-time traffic information. Drivers can also make use of additional comprehensive services via their smartphone, which include the Porsche Connect App and Porsche Car Connect App.

The new 718 Cayman models are available to order today from Porsche Centres in the UK and Ireland. For the first time, the coupé is priced below the roadster – in a similar way to the 911 models. First deliveries begin in the autumn.

Customers will also be invited to explore the potential of their new car, and further develop their own skills behind the wheel, by participating in a bespoke driving experience around the tracks at the recently-expanded Porsche Experience Centre, Silverstone.